"A Magical Showdown" is episode 80 of Minecraft Diaries Season 1.

"What has changed in the village of Phoenix Drop while we've been away? How are the people doing?"

Aphmau woke up at night to a sudden loud sound. Panicked, she ran to join her guards. After a discussion with Laurance, Dante, and Garroth, Aphmau finds that this could be O'Khasis invading. Aphmau and her guards split up to find the source of the sound, she chose to search the housing area.

While walking around the area more loud sounds occurred. And suddenly a tall house appeared in the background. Aphmau rushes to it to find a familiar witch, Lucinda.

After talking for awhile it is revealed that Lucinda and Bigglesworth are moving in, due to some problems at Pikoro village. The guards join Aphmau and Lucinda, and the conversation continues. Lucinda then ask if Aphmau could show her around Phoenix Drop in the morning and Aphmau says yes.

Everyone starts walking back home but Laurance stays behind with Aphmau. At first it seems Laurance is flirting, but then he takes a more serious tone. He informs Aphmau that he is concerned about Lucinda's arrival, telling her that Magik Users and Witches have an unsteady past and relationship due to a war between them long ago. Slightly concerned, Aphmau walks home and goes to sleep.

In the morning Aphmau joins Levin, Zoey, and Malachi downstairs. Soon Lucinda joins too, bringing some fresh baked bread. They all are eating breakfast when Zoey notices Kawaii~Chan at the door. Aphmau gets up and greets Kawaii~Chan. Lucinda then got up to face Kawaii~Chan.

They get in a small argument, seeming to know one another in the past, and end up challenging each other for a duel.

They head to the docks, Malachi, Levin, Zoey, and Aphmau stand by, watching.

Then it's revealed that Lucinda and Kawaii~Chan are rivals in the maid cafe business. Kawaii~Chan explains that they both had opened up maid cafes across from each other in O'Khasis. It was a friendly competition until the Lord announced that only one cafe could remain open. They had a duel, deciding that the one who lost would leave. Unfortunately, things got out of hand and it caused an explosion. They were both banished from O'Khasis, going their separate ways, but swore to end what they started.

Aphmau watches as the duel starts. But it soon gets out of control and the dock explodes. Both Kawaii~Chan and Lucinda call it a draw, making up and going back to their old friendly rivalry. 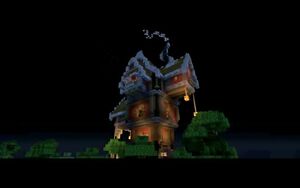 Retrieved from "https://aphmau.fandom.com/wiki/A_Magical_Showdown?oldid=114890"
Community content is available under CC-BY-SA unless otherwise noted.