Aphmau's Year, fully titled MyStreet: Aphmau's Year, is a five-part documentary series following Aphmau and the year after the events of MyStreet: Emerald Secret.[1] The series premiered on May 17th, 2017 and concluded on June 5, 2017.

The series was announced alongside the fifth season of MyStreet, following the finale of MyStreet: Emerald Secret.

The theme song for this mini series is a piano arrangement of a song from Final Fantasy IX called "Melodies of Life", where all of the episode names come from the lyrics in the English version.

On May 16th, 2017, Jason uploaded the series title and art for the series on Instagram.[2]

The series follows Aphmau and the year after the events of MyStreet: Emerald Secret.

Two Months after Emerald Secret ended, Aphmau had been staying at her childhood home with Sylvana as Garroth, Zane, Lucinda, and Kim/Ghost prepare a welcome-back party, with the others being suspicious about it. When she arrives, Zane and Kawaii~Chan offer to look after her while she adjusts. As they are cooking for her, Kawaii~Chan started to draw suspicion over Aphmau's odd behavior and Zane had no choice but to explain everything as Kawaii~Chan can see through lies. She promises to not tell anyone and to support her as much as possible as the two made oatmeal cookies, Aaron's favorite. Meanwhile, Aphmau is reflecting on some precious memories with Aaron as she sees Kawaii~Chan and Zane make cookies for Aaron. As she returns back to her room, Woof, her plush wolf, makes its reappearance.

Five months later, Aphmau requested Lucinda to teach her magic and she explains all of the types of magic and its connection with the emotions. After trying to move a plant, Travis comes in, telling that someone is here in Aphmau's front yard. Like Kawaii~Chan, Travis is suspicious about her and what happened at the lodge. Lucinda runs to her studies as Travis keeps asking her and when he noticed the potion books, he started to act very strangely, scaring Lucinda. Meanwhile, Aphmau meets with Melissa, Aaron's sister who told her Aaron's status and handed her a box. Inside was a letter from Aaron and a can of Poopsi. Moved by the letter, Aphmau asked to talk to Aaron but cannot do so, but she can record her voice so Aaron can hear her. She runs up to start recording her thoughts and questions and prepares to send them off to Aaron.

Seven months later, during Christmas time, the gang are wrapping Christmas presents as Aphmau trains on her healing magic, much to her plush's annoyance. After it told her advice to not go beyond the limit, Aphmau remembered a time during Love-Love-Paradise and a bit of magic comes out of her hand. When she wakes up the next morning, she wanted to learn more about werewolves so she first attempts to ask her plush, but it doesn't know and thought Aphmau took wolf classes during high school. This gives Aphmau a plan. Meanwhile as Garroth and the others are working on the bow, they all explain their excitement for the party every Christmas. Kim receive a call from Lucinda about someone stealing into her house and stole the potion book, which she told Garroth first about. At Aphmau's house, the trio Daniel, Dottie and Rylan arrived and she explained to them that December 17th is Aaron's birthday and she has to celebrate it without him. Sylvana appeared telling the trio to join the party. As the party commence, Garroth and Aphmau had a chat about missing Aaron on his birthday and he gives her a present that was told not to open until later. Aphmau finds a journal inside and decides to write a diary for Aaron to read. Lucinda and the others explain what happened at her house last night and Lucinda started to believe Travis may have stolen the book, but decides to keep an eye out for now.

Nine months later, Aphmau decides to wear werewolf ears and tail to help feel like a werewolf so as to help her understand them more. Travis' father, Terry, came over to Travis' and Katelyn's place and takes them out to eat and for a spa. Melissa comes over and tells Aphmau about Aaron's full recovery and her trip to Starlight Wonderland, and also her questioning about wearing wolf ears and tail. Katelyn and Travis met Dottie outside Aphmau's house where they had some confusion about her familiar appearance that not even Travis nor Katelyn remember since high school. Acting strange once again, Travis offers to tell Katelyn the story of the Ultima. As Aphmau reads about Ultima, she asked Woof about Aaron loving her as a relationship between werewolf and a human. It replied that being the fabled Ultima doesn't mean Aaron won't love her. This caused Aphmau to remember a time where she and Aaron made up at the high school during Season 3, which gives her confidence now.

Twelve months later, Melissa is waiting for Aphmau to come outside her house so they can go on the plane. When she isn't coming out, Melissa realized that Aphmau hadn't even started packing, so she takes her on a shopping trip to the mall by heading to Macy's to pick out fresh clothes after Woof claims that Aphmau wore all of her clothes. Aphmau and Melissa decided to eat out as Melissa asked what Aphmau is going to do after she sees Aaron. Aphmau remembers a flashback when she's force to leave Aaron back at the lodge, and says that she wants to see him. As Aphmau returns to her house to get change, she steps outside, mutters that she's ready and heads with Melissa to the seaport ready to go to Starlight. The episode also shows that Aphmau has mastered healing powers.

Episode were relatively uploaded in a 3-6 day cycle, with each episode having a timeskip of 2-3 months in between. 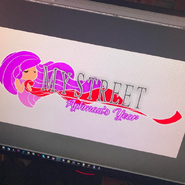 Prod 1 - Series Name
Add a photo to this gallery

Retrieved from "https://aphmau.fandom.com/wiki/Aphmau%27s_Year?oldid=154842"
Community content is available under CC-BY-SA unless otherwise noted.