This article is about the character in Minecraft Diaries Season One. For Aphmau in season two, click here.

Aphmau was the Lord of the village of Phoenix Drop in Season 1 of Minecraft Diaries.

Aphmau, in the beginning, was a normal Minecraft player who has spawned into a newly generated world. Upon spawning she almost immediately finds a village. She has no other memories of her past, and that is addressed in . She is later made Lord of Phoenix Drop.

Aphmau has many outfits in the series which changes from time to time.

1 of 4
Add photo
Casual: A purple crop top, light purple shorts, grey gloves and purple, black and white rubber. This was Jess' usual skin outside of Diaries, as there was no skin specifically for the series in the beginning.

Bridesmaid Dress: A purple version of Cadenza's dress made by Cadenza for Donna and Logan's wedding. It has a crisscross armlet, a purple bodice, white in the abdominal area and purple all the way down her legs and has a slit in the middle.

Disguise: Long, purple-ish hair that's in a braid in the back, a purple top with gold trimmings, a gold headband with a purple gem, gold bracelets, and a small purple skirt with gold trimmings. Aphmau got this makeover from Nicole in "Episode 66". The episode thumbnail and title jokingly refer to Aphmau as a princess in this outfit.

Snow Suit: A thick white and purple snow hoodie and pants that Dante gave Aphmau on the way to the Eastern Wolf Tribe in "Our Fears..."

Amethyst's Dress: An off-shoulder dress which is purple. It is a style like the Kingdoms and Battles era. It has crosses in the middle of the dark purple bodice. It is an ombre dress, from dark purple to a darker shade. in the middle is white cloth. It was made by Amethyst, the wife of the Pikoro Village Inn Keep.

Cadenza's Gift: A purple and black outfit with a quiver sash and a purple bow given to Aphmau by Cadenza in "Respect for Irene".

In the beginning, Aphmau seems to be a more of a carefree happy-go-lucky type who is just trying to help out where or when she can, while still surviving on her own. When she was Lord of Phoenix Drop she was kind and honest to her villagers, and was adventurous and brave when she went on long journeys and trips to different places in her Minecraft world. She is also such a loving adoptive mother for Levin and Malachi while she was doing her duties as Lord. Aphmau, in the series, is very gentle and selfless and cares for everyone she meets. She is also humorous as when she cracks random jokes to the different characters in the series. 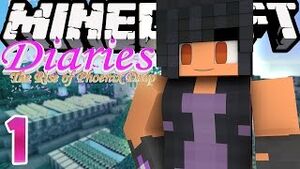 Retrieved from "https://aphmau.fandom.com/wiki/Aphmau_(Minecraft_Diaries_S1)?oldid=155805"
Community content is available under CC-BY-SA unless otherwise noted.