Blaze was a supporting character introduced in "Looking for an Alpha". According to Dottie, he was one of the hottest werewolves in the school.

It is unknown what age Blaze was in Phoenix Drop High Season 2 but he is assumed to have been 17 years old because he was a senior. In his first appearance, Blaze was interviewed by Aphmau as a candidate for Alpha Male. He threw Fenrir through a window and then he showed off his muscles, much to Aphmau's embarrassment. He entered in the werewolf games and was disappointed when Ein was chosen by Aaron as Alpha Male. He began to be suspicious of Ein when Ein wrongfully made Daniel the Omega. To learn more about Ein, he employed the scientific method. He continued to help out the other werewolves and earned a kiss on the cheek from Dottie when he helped her with her locker. He earned many enemies among the other werewolves when he continued to protect Daniel from bullies. He realized that things at PDH couldn't continue as they were, so he contacted Aaron. The two conspired to bring down Ein, Aaron would trick Ein to missing the new werewolf games by challenging him to a fight, while Blaze would win the games with Aphmau. Things did not go as planned. Daniel got to the gym before Aaron did and challenged Ein to a fight. Meanwhile, Ein's cronies kept cheating at the games, but Aphmau and Blaze helped each other and Blaze won and was crowned the Alpha Male. Daniel lost the fight against Ein, sparking Aaron to intervene. Aaron easily defeated Ein (being an Ultima Werewolf) and unknowingly exposed his ears and tail to Daniel. Aaron threw Ein out the window onto the field where the games took place. Everyone realized that whoever defeated Ein should be the new Alpha. Aaron then threw Daniel out the window on top of Ein, making it look like Daniel had beat him. Everyone starting saying that Daniel and Blaze should fight for the title of alpha, but Blaze did not want to hurt his friend, so he gave his title to Daniel even if Aaron is the one that defeated Ein.

Blaze made his first MyStreet debut in "Here In My Arms" when he was seen playing catch with a frisbee and managed to knock both Lucinda and Kim down when he got it, causing Lucinda and Ghost to be mad over what he did and Kim calmed them both down. It is later revealed in the next episode that he along with Maria and the Werewolf Trio were called by Derek to chat with Aaron during his year so that he can get used to his werewolf life. Afterward, he is seen playing chase with the trio, who then chase him, wanting to pet his ears after seeing Aphmau pet Aaron's.

In Season 6, he helped Aaron and Kawaii~Chan find the werewolf hideout that he, Dottie and Daniel used after the Guardian Forces invaded.

He explained that Rylan and Maria were abducted and suddenly asked Aaron if he's the Ultima, after he sees Aphmau close her eyes in "Kawaii~Chan's Secret" when Aaron was about to go berserk. Aaron said no, refusing to even trust his friend during his one-year recovery, and Blaze let him in. He ordered Daniel to guard the entrance while Aaron and Kawaii~Chan leave for the beach.

Ein then arrives, claiming to be a friend and a werewolf. He soon overpowered everyone in the hideout and permanently took control over them with Forever Potions of Obedience, except for Daniel. To test it out, he had Blaze hurt himself, first by ramming into the stone wall then having two other werewolves attack him and watched with glee. Once Daniel returns to the group, Ein orders Daniel to continue hurting the now deeply injured Blaze.

Once Ein lures Aphmau into the same cave, Ein distracts her in order for Blaze to secretly attempt to affect her with a forever potion, but it does not work, and soon awaits for Aaron to come in, accusing him of being the reason the werewolves were being hunted. He watches from afar as Ein kills Aphmau and Aaron taking her away.

Sometime later, in "Out of Time", Blaze and the rest of the affected werewolves follow Ein to the resort lake in order to wait for Aaron. Once a large group of people was escorted into the lakeside, they were spotted by the frightened crowd, but were told by the GF to not worry about those werewolves. Once they spot Aaron, Blaze confronts him once more, yelling about the fact that this was all Aaron's fault. Aaron asks him to stop, but the affected Blaze continues, telling him that all the people that were killed were because of him, and soon causes Aaron, in an act of fury, to take out the sword from the mansion and brutally swing its poisonous blade into Blaze's torso, killing him instantly.

In "End of a Lifetime," Blaze, no longer brainwashed due to his death, sees Aphmau completely immobile. He did not want to leave her there, so he takes her to the limbo-like realm. When Irene visits, Aphmau calls herself a liability and a waste, believing that all she did was bring her friends down. Blaze replies to this by telling her that even though he did things he did not want to, he had no regrets in his life, and he was glad to have met her. Irene chooses for Aphmau to come back to life. Before she leaves, Blaze tells Aphmau "Go kick some butt for me, okay?" She leaves the door and comes back to life.

He was a werewolf with a messy, burning red hair complemented by black ears and tail. He had heterochromia, his right eye was green and the other was blue. He was noticeably tanned, but he mentioned in season 5 that he burns easily. Like other male characters, he possessed abs that look fairly similar to Aaron's and is roughly the same height as him. However, it has been implied in several minigames that he's fairly chubby as well as being muscular. He was also covered in scars, including his face, largely to his continuous fights to be Alpha in his high school and later years.

Blaze doesn't take grooming very seriously despite taking pride in his appearance the majority of the time. He claims that this is because it's hard to wash properly when he has so much fur, but this is likely just an excuse as Dottie, Diana, and Aaron are all notably better groomed than him, according to Aphmau.

Though he doesn't wear them very often, Blaze has glasses that he needs in order to read as he is far-sighted.

Like his name, he was hyper and a bit hot-headed. Even though he had a short temper, he didn't usually hold grudges. He is generally a goofy, light-hearted person but he is rather self-absorbed sometimes. Despite this, he is a caring soul and is always willing to lend a helping hand to a friend, as we see in Phoenix Drop High when he went out of his way to lighten the burden Aphmau had to deal with being a human alpha, as well as protecting the Pup Trio at the expense of most of the pack's respect for him. However, as loyal and helpful as he is, he doesn't always take his friends' feelings into consideration and doesn't understand social cues or norms very well, so he can come off quite rude sometimes. He was very talkative and was able to ramble for hours and keep dead conversations alive, as well as always being able to put a smile on people's faces with witty jokes. Overall, he was a great friend to everyone he associated with.

Blaze isn't very smart. He had a big interest in science (especially in high school), but he had trouble processing the information, especially when it came to long words. He often mixed up similar-sounding words, sometimes even inadvertently creating new ones through mispronunciation. It is unclear if this was due to an auditory processing disorder or simply poor memory, but whatever the case, it didn't stop him from pursuing science. Blaze had bad grades for most of high school, and ended up having to redo his senior year.

He has a very high opinion of himself and often makes boastful claims that aren't always backed up by reality. He will often flaunt his physical prowess by flexing publicly at inappropriate times,, or challenging others to fights or competitions of strength. Sadly, this high self-worth may be a result of Blaze overcompensating to hide feelings of inferiority. Blaze isn't openly self-conscious very often, but when he gets frustrated with himself it can bug him out for a long time. He tends to steer completely clear of things he's not good at because he doesn't like to feel insecure. Thus, fans have speculated that he may suffer from a superiority complex.

Blaze has a wide range of interests, particularly exercise and scientific endeavors. In high school, he exercised three times a day. It is unclear whether or not he was still this dedicated to exercise as of season 5, but since he said he'd gotten lazy since the summer started, it likely isn't very much of a priority for him anymore. However, he still enjoys rough-housing and playing sports. He is an adventurous spirit and claims to be willing to try anything once. All in all, what he enjoys most is spending time with his friends. 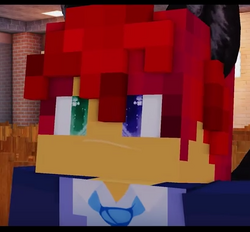 Retrieved from "https://aphmau.fandom.com/wiki/Blaze_(MyStreet)?oldid=158915"
Community content is available under CC-BY-SA unless otherwise noted.