Chad was first seen in Episode 45 of Season Two, when Aphmau, saw him in the clearing. He claimed to be very thirsty, so Aphmau gave him a bottle of orange juice, after which he appeared to be instantly revived, and then ran off. When he reappeared, later on, Aphmau followed him and after a short discussion that revealed that they both wanted to escape the forest. Aphmau agreed to take him back to her camp so that he could join the group. However, when they started walking, they lost sight of the clearing where the others were staying and stumbled upon a house, where Chad called out to see if anyone was there. They were suddenly surrounded by several familiars armed with spears, and their master, a witch called Hyria appeared soon afterward.

In Episode 46 of Season Two, Chad starts annoying Hyria's familiars and wants to study them for the information that he wants. Thus, making them so annoyed that they threw him through a window. After annoying them for a period of time they turn into a giant familiar. After Aphmau was cured Hyria gives Aphmau the directions to her friends via fairy. Chad is fascinated by the fairy and starts to chase it with Aphmau close behind. I believe Chad G. Augistine Au'Leopold The III's occupation is a scientist just thought you should know! He is also belived to be quite strong as he got smashed through a window and immediately ran up without a scratch and Katelyn punched him but he wasn't knocked out.

During S2 Episode 50, Chad comes along Aphmau's path and tells her that he is able to act as the priest for Emmalyn's wedding. He says that when he was "much, much younger," he followed the teachings of Lady Irene by book until he discovered the wonders of study and inventing. Though at this age, he's a little rusty.

During S2 Episode 60, Chad completed constructing what appears to be a steam-powered ship, after Aphmau mistakes the dinky box as his creation.

Chad has light skin and chestnut colored hair and mustache, and has beady eyes with black irises, and his left eyebrow is constantly raised; as if it is permanent. He wears what appears to be a Victorian frock coat that seems to be sepia colored. The collar of his coat is a more tawny color than the rest of the coat, and is jagged, suggesting that it is torn. The sleeves of a white undershirt peek out of his coat sleeves, and what is either a shirt collar or a cravat is visible. He wears black trousers. Chad also appears to have crow's feet (the name for wrinkles in the outer corner of the eyes as the result of aging), which suggests he is older than most of the other characters.

Chad is a cheerful, energetic man with a love for science and nature; often at times too much, which gives off the impression that he is a little crazy. He has the habit of sticking his nose into everyone else's business, and tends to bring his face very close to the person who he is speaking to, which they consider to be an invasion of their personal space and makes them feel uncomfortable. He is also portrayed as being rather eccentric, and seems to have the stereotypical personality of a bumpkin - an unsophisticated person from the countryside, although he does appear rather dapper. He can easily get up from a hard blow, like when Katelyn punched him. But, when in a very serious situation, such as a Wedding Ceremony, he can act fairly calm. When Aphmau voices him herself, she gives him a heightened British accent, which adds to his excitement at times. 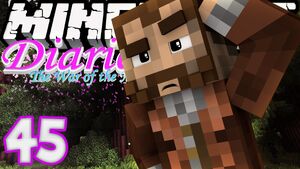 Retrieved from "https://aphmau.fandom.com/wiki/Chad?oldid=151991"
Community content is available under CC-BY-SA unless otherwise noted.