Start a Wiki
Daniel is a character that appears as the tritagonist in Phoenix Drop High Season 2 and a main character in MyStreet: Starlight.

Daniel is a werewolf that attended Phoenix Drop High. He played piano, and was known as one of the weakest werewolves of the school, along with Dottie and Rylan. They instantly bonded when Gavin summoned the three to a room where he informed Aaron to pick one as the Omega. When Aaron spared them and said he would remain the Omega, they immediately respected him.

He quickly became friends with Aphmau when she became Alpha and along with Dottie and Rylan, helped her learn more about werewolves and how to be Alpha. Daniel was disappointed that Ein chose him out of the Werewolf Trio to be the Omega, and what made him start to lose trust in Ein is that he did it without Aphmau's consent. They told Aaron about Ein's action and Aaron told Aphmau about it. After Ein was defeated by Aaron, Aaron made it look like Daniel defeated him, therefore making him Alpha Male in his sophomore year. He kept his title by the time Aphmau graduated, but he was unfortunately set back a year.

He, with Dottie and Rylan, returned in Aphmau's Year, making his first appearance in MyStreet. He, along with his friends, came to help Aphmau learn more about werewolves to help her have a better understanding of Aaron.

Because he was a past friend of Aaron, he, along with Dottie, Rylan, Blaze, and Maria, was summoned by Aaron's parents to Starlight Wonderland so Aaron could be around his own kind while he underwent physical therapy. He and the other werewolves have spent time with Aaron and Aphmau in Starlight Wonderland, playing games with them.

Daniel has dark green hair that matches his dark green ears and tail. He has bright, semi-dark blue eyes.

In his school uniform, Daniel is presented with his tie hanging out of his shirt, which is half-unbuttoned, revealing a white under-shirt.

In his outside attire, he wears an orange jacket with light orange accents. His white jacket strings are uneven. He also has rolled up sleeves which reveal a white sleeve. His open jacket leaves space for his light blue under-shirt to be seen. He wears a dark gray pair of pants and his shoes are mostly white with an orange tongue and gray accents.

Daniel is very shy at times, but when he is excited and happy he can be very energetic and outgoing. Daniel also hates fighting and shows general concern for his friends. (very much adorable) He also is confirmed to be "Everyone cinnamon roll". He may also draw inspiration from Izuku Midoriya of My Hero Academia. 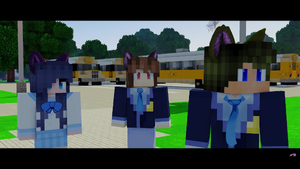 Retrieved from "https://aphmau.fandom.com/wiki/Daniel_(MyStreet)?oldid=161659"
Community content is available under CC-BY-SA unless otherwise noted.