Add a photo to this gallery
Diana is a main character in Falcon Claw University. She is a friend of Cathy, Betty and Jenny.

Diana's physical features are very dark in color, including browns, reds, and blacks.

In General - Diana has pale skin with a yellow undertone, which helps to accentuate her amber eyes, with very heavy black eyeliner and eye shadow, and two-toned red and black hair, which is styled in a long messy bob. Seeing as she is a werewolf, Diana also has black werewolf ears, with two piercings on her left ear, and a black wolf tail.

Seeing as Diana goes for the rules of goth clothing, she wears a lot more dark or more muted colors in her clothing choice.

Everyday Outfit - In her everyday outfit she wears a muted pink and brown off the shoulder dress, the brown being the main sections of the dress and the pink being the frills on dress. Diana also has a lot of black clothing in her design, including a choker, a bracelet, transparent tights, and knee-high, lace-up combat boots.

Diana seems to be nice in general, but she does have a bit of a nasty temper, especially when being insulted. This was shown when Zane called her a 'Poser' in 'Phoenix Drop High: Graduation Days' and it took Aphmau and her alpha authority to stop her and calm her down. She also has the tendency to complain about someone's annoying habits, like Ken and his 'conspiracy' theories. She is also competitive and tends to get a little hostile, especially when it comes to Jenny and Aphmau being too close to Aaron. 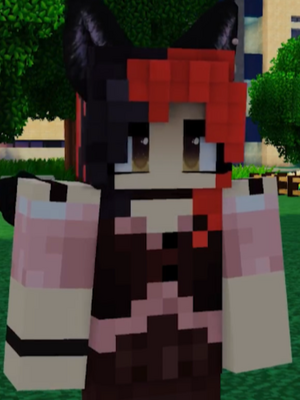 Retrieved from "https://aphmau.fandom.com/wiki/Diana_(MyStreet)?oldid=157335"
Community content is available under CC-BY-SA unless otherwise noted.