Donna is the daughter of the Crazy Cat Lady, Urla and niece of Dr Doctor. She is married to Logan and mother to Yip, whom was adopted, as well as her biological children: twins Rollo and Lello and her and Logan's baby daughter Luca. Michi is the adoptive sister of Donna when her mother disowned her.

Donna and Logan were kidnapped by a hostile wolf tribe and she had Aphmau help her rescue her husband Logan, after they escaped they had learned that it had an affect that killed all of the enemy wolves and left Yip an orphan hence why he was adopted. This set in motion the introduction of several characters such as Lucinda, Dante and Malachi.

15 years later, Donna is still in Phoenix Drop and is now mother to four children, Yip, the twins Rollo and Lello and Luca.

Donna has chestnut brown hair worn at shoulder length, lime green eyes and in Season One, is seen wearing shorts and a T-shirt striped with alternating shades of gray. In Season Two, Donna has what could be considered to be a more feminine look, as she wears a salmon pink dress with white embroidery along the sleeves. Her hair is also a slightly lighter brown, which may be indicative that it is going gray with age. In Season Three she is wearing a grey dress with yellow buttons and a blue belt.

Donna is a very kind person. She is a caring mother. She cares for her four children and that all of them have werewolf in their blood unlike her mother, she does not care if someone is a werewolf. Though it was said before when Logan was just turning into a werewolf that Donna had a bad relationship with werewolves before. Her mother could made them seem like a dangerous smelly threat or it's quite possible that werewolves did attack her village causing her to fear them.

Even after being married for nearly 2 decades and having four children, Donna still likes to gaze and look at the men that Aphmau always brings back from her journies. Aphmau often scolds Donna on this. Although she says she is completely loyal to her family, which she is, she still seems to get the hots for random people. Donna loves Aphmau as her sister, but her adopted sister Michi is a horrible sister, because she kidnapped Donna's Lord and family friends.

Despite being a gossip, gold-digger and shallow at first, there has been times where her senses were true. This is shown when she was skeptical to befriend Sasha as she felt uneasy around her. 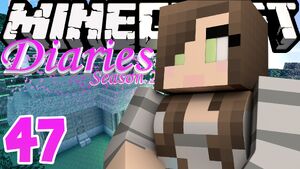 Retrieved from "https://aphmau.fandom.com/wiki/Donna?oldid=155808"
Community content is available under CC-BY-SA unless otherwise noted.