In episode "Lover Boy", we are introduced to Dottie. As part of the 3 pups which included Rylan and Daniel, she would often talk to Aphmau, who she called Alpha. She would also ask Aaron things about Aph as well, since they were close the previous year.Also Dottie is 18.

After Ein becomes Alpha, she starts playing a bigger role. After Daniel becomes Omega, she would often spend her time training Daniel of defending him. Later, she also help Aph find her phone and help set up the werewolf games.

Dottie has dark bluish-purple hair and her ears are dark purple with pink inside. Her eyes are blue and usually, she can be found wearing a school uniform.

However, she can be seen wearing casual clothing in a few episodes. This outfit contains a dark purple to light purple hombre flannel that is unbuttoned which reveals a white crop top and as bottoms, she has blue shorts.

Usually, she can be found hanging around Daniel and Rylan. She is the calmest one out of the group and yet is still extremely rash and hotheaded. She reminds the two often that Aphmau is a human and she still has much to learn about being an alpha. She seems sisterly and is happy with the current alpha, unlike Maria, who is always trying to challenge Aphmau for the position.

As an adult, her personality has not changed. She is still the sisterly, friendly Dottie we know and love. 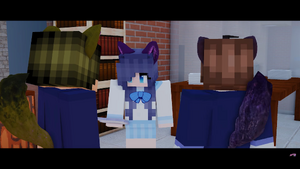 Retrieved from "https://aphmau.fandom.com/wiki/Dottie_(MyStreet)?oldid=162514"
Community content is available under CC-BY-SA unless otherwise noted.