Emma is married to Corey and is the mother of Kyle. She is first seen in Episode 47 of Season One, where her name was originally Emmalyn, but since there was already an Emmalyn in the village, her name was shortened to simply Emma and has been that way ever since.

After the 15 years, it is found out that she and her husband are alive, but like Dale and Molly they also left Phoenix Drop. However, their son decided to stay in Phoenix Drop, just like Molly and Dale's daughter Alexis and became a guard. The ship name for Emma and Corey is Comma, which is weird since a comma is a punctuation thing used to separate items in a list. So remember, everytime you use a comma in an edited article, you are supporting Comma.

Emma has long, light blonde hair that drapes over her shoulders and emerald green eyes. She wears a simple, dark green dress with short sleeves.

Emma is kind, welcoming and reassuring. When Aphmau suggests that when Kyle is slightly older, he and Levin can be playmates, Emma is eager to agree to her offer. Emma seems to be a very loving and caring mother to Kyle, even when they were in the little cell Corey made for them. 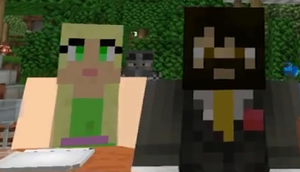 Retrieved from "https://aphmau.fandom.com/wiki/Emma?oldid=117346"
Community content is available under CC-BY-SA unless otherwise noted.