Fenrir is the son of the King of the Southeastern Wolf Tribe and Queen Ylva. He is being forced to marry Aphmau despite the fact that he is in love with another girl, who is also his best friend, Abby, who has been placed in the dungeon by his father in order to blackmail him with her life. During his and Aphmau's "wedding", his father falls of the building to his death, due to Laurance being jealous and being consumed by his Shadow warrior form. Before Laurance managed to kill him too, Aphmau managed to soothe him into his normal form.

He is made King after his father died, and sent out, via howl, that he is looking for Aphmau, Laurance, and Katelyn. When he released the scouts, he told them to act without question if they find anyone with their scent. He clearly ignores the fact that Aphmau saved his life and even makes her the main target just because she was with Laurance. Despite not even being at the wedding, Katelyn is also being hunted just for being friends with them. Michi isn't even being hunted despite her being the one responsible for bringing a Shadow Knight to the wedding. He also started patrols across his territory to kill any human who trespasses.

Three years later, in episode 34, Fenrir and his troop run into Emmalyn who was trying to hide from Zane. Emmalyn recognized him as the king of the Southeastern Werewolf Tribe and Fenrir, interested in her, orders Blaze to arrest her. He questions why he could’ve killed her and Fenrir explains that she’s one of the rare humans to know his name and thus, may know where Aphmau is.

Fenrir summons Emmalyn to his chambers where he asks where she is from. Being anxious, Emmalyn tells him that he is a traveling scholar. He tells her he smells a familiar scent on her, but it is clouded by many other scents. He asks again where she is from, with Emmalyn telling him she is from Meteli. She is then dismissed by Fenrir into her chambers.

When talking with Blaze, he is informed that they searched Emmalyn's belongings and only found books thus proving her statement. Fenrir is still not convinced since he smelled blood all over her. He then asks about the scouts looking for Aphmau. Blaze tells him that there was no word from them. Fenrir then reveals his tyrannical turn by saying that Aphmau was the one who killed his father along with his brothers and sisters. He doesn't even recall Laurance's name and only referred to him as her guard that aided her in the murder. He wanted revenge. He wanted her family dead. Despite her not even being a Meif'wa anymore and thus making the marriage pointless, he says that he wanted to carry on his father's goal and that she will either marry him or die. Whatever would make her life more horrid, he wants her to suffer. Not only that, but he documented her as a Shadow Knight instead of Laurance.

When Blaze finally got info about Aphmau being from Phoenix Drop, he heads off to tell Fenrir. This will most likely lead to Fenrir leading an invasion towards Phoenix Drop similar to the way Scaleswind did around 18 years ago.

He has brown hair and black eyes. He wears a white and gold jacket, black gloves, grey pants, and black and gold shoes. In season 2 he now shows wearwolf ears and wears red.

He was very kind and understanding to Aphmau, as he is stuck in the same position she is. But now he is angry after his father's death and has mentally mutated into an exact copy of him. He is now hunting down Aphmau and her friends via howl. He became oblivious of Aphmau saving his life and instead believed that she was the one that killed his father and not Laurance, eventually even only wanting to get revenge on Aphmau and wanting to kill her entire family. He even forgets about Abby and instead wishes to marry Aphmau, but as an act of revenge instead of love.

3 years after becoming king, it is hinted by Blaze that Fenrir tends to have almost anyone immediately executed by his guards when they are around his territory. This might be why his name is rarely known. 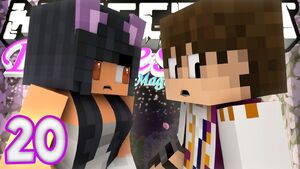 Retrieved from "https://aphmau.fandom.com/wiki/Fenrir?oldid=153396"
Community content is available under CC-BY-SA unless otherwise noted.