Start a Wiki
Fenrir is a minor character in both seasons of MyStreet Phoenix Drop High.

Fenrir first appears in "Werewolf Class". When Aphmau first arrives to class, he's standing in the front watching Balto and Aaron argue. He explains to Aphmau that they shouldn't get involved, since it will most likely end in Balto hurting Aaron badly. He tells Aphmau that the last person to get in Balto's way was sent to the hospital, before standing by and continuing to watch when she intervenes and is afterwards protected by Aaron.

He's only seen in the background in "Operation: Slumber Party!" and "Shadow Knights Rule!", sitting next to Balto in class.

In "Aphmau's Crush On Kai", he appears in Katelyn's flashback of a conversation between Ryder and another werewolf. They talk about how Aphmau has been going on dates with Ein. Fenrir approaches and is told he has competition for Alpha position, but he says she'll never acknowledge him. He plots with the other two werewolves to interrupt Ein and Aphmau on the weekend.

In "Kai's Crush", he's seen through Daniel's flashback of a fight between him and Blaze. Both werewolves start to fight over the Alpha position, insulting and yelling at each other while Daniel watches. Fenrir bites Blaze, even though it was apparently a rule set not to do so, and the flashback ends.

In "Looking for an Alpha", Fenrir takes part in the Alpha Male tryouts. He comes into the classroom Aphmau is in for an interview, scaring her with how suddenly he appears. He greets her politely before he sits down. She starts to tell him it's their first time meeting, only for him to remind her of their encounter at the beginning of her freshman year. He explains that Aaron was protecting her, rather than him just fighting Balto for his own reasons.

Aphmau asks him what he thinks would make him a good Alpha, Fenrir telling her he's been dethroning the other werewolves also competing for the role of Alpha. He says he can hunt really well, having to think for a moment for anything else he can say about himself. He tells Aphmau he thinks she's pretty before the interview ends, Fenrir getting up to leave after a brief silence. Before he gets the chance to leave properly, Blaze runs in and throws him out the window, knocking him out.

Fenrir has short brown hair and black eyes. His ears and tail are both dull brown, and he is only ever seen in the boys' Phoenix Drop High uniform.

In Phoenix Drop High Season 2, his ears are updated to be brighter, with pink fur on the insides. His eyes are also changed to brown.

Fenrir comes off as very polite, speaking in a soft tone with slightly formal speech compared to other werewolves. He seems to have a good memory, remembering his first encounter with Aphmau in the next year during his interview for the Alpha position. He also seems to be a bit of a cheat, apparently biting and pulling Blaze's tail during their fight despite rules being set against it. 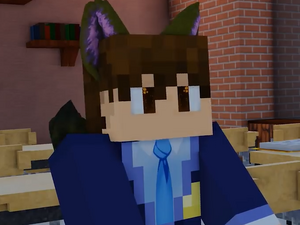 Retrieved from "https://aphmau.fandom.com/wiki/Fenrir_(MyStreet)?oldid=147143"
Community content is available under CC-BY-SA unless otherwise noted.