Not much is known about his life. He does have a younger brother, who he influences greatly, Dante. All we know is that his dad left him.

In "Weekend Friends!", Gene and his friends are seen at their usual hangout; the park. He approaches Aphmau and Laurance and talks to them, while Laurance voices his annoyance towards his "Shadow Knights" delinquent group. Laurance reveals he was a part of them in his freshman year but stopped hanging out with them.

In "Shadow Knights Rule!", his group was defacing a school wall with their emblem. He recalls his history with Aaron and his previous fights. Gene notices Aphmau passing by, who he stops immediately. Noted by her silence, he figures that Laurance had told her that his group was full of troublemakers. Gene advances by offering her to sit with their group but is instantly stopped by Teony's sudden appearance.

In "First Kiss", he is seen at the end of the episode with his phone camera out, taking a picture of Aphmau and Garroth kissing, laughing to himself "I now have everything I need to play you [Aphmau]", implying that he will blackmail Aphmau into doing something by threatening to show to Laurance the picture he took.

In "Blackmailed", his gang is blackmailing Aphmau with Gene's picture of her and Garroth kissing. He threatened to show it to Laurance, ruining his and Garroth's friendship. He meets behind the stands of the football field. Gene then nicknames her 'Kitty' "she had claws" as he puts it. Laurance then comes and gets Aphmau away from Gene. However, Gene wants a favor of Aphmau; "Meet my mom" he said. He wants her to meet his mom to show that he hangs out with good people. The reason being that his mother dislikes Zenix and Sasha. Gene leaves for dance lessons with his mother but threatens Aphmau that the picture will find its way to Laurance if rumors about these dance lessons spread.

In "Skipping School", he forces Aphmau to skip school and meet his friends at the park. Aphmau protests, but Gene threatens to show the picture to Laurance if she doesn't obey him. He makes Aphmau deface one of the walls in the park with the Shadow Knight logo.

In "Fight or Flight", Aphmau comes up to him, saying that she doesn't want him to blackmail her anymore and that she doesn't care if he has the picture. Gene returns to his gang saying that he "lost control" of her. He holds out the phone and says that he still has the picture though. At that moment, the phone is knocked out of his hands by Aaron, as he steps on it smashing it to pieces. Gene swears to get revenge on him and tells him he's going to pay for it.

In the following episodes, Gene plans revenge on Aaron with Balto. Ivy and Lily also agree to join in, but Gene calls Lily a liar in an episode and earns a slap in the face by Ivy. Ivy and Lily then seem to have stopped helping.

One day, Balto spots Aaron and Aphmau being nice to each other, he warns Gene who says "This isn't ruining my plan at all. In fact, my plan is happening sooner than expected." Gene makes Balto punch Aaron so that Aaron will fight him. Gene grabs his new phone and prepares to film the fight so that he can show it to the principal who would then expel Aaron as a result. Aaron refuses to fight, knowing it'll be more trouble than it's worth. Gene then says "Not gonna fight? Fine. If you can't get past Balto then you won't stop me from... kissing Aphmau." Aphmau is shocked and Aaron cannot take this and is about to fight Balto. However, Garroth and Laurance had filmed the entire scene and threatened to show it to a teacher if Gene didn't let Aaron and Aphmau go. Gene tries to defend himself, but earns a punch in the face by Aphmau. Kawaii~Chan then comes out of nowhere and turns Gene and Balto into cats. She chases them with a stick and yells "No one messes with Kawaii~Chan's ship and gets away with it!".

In "Kissing Katelyn", Gene sends a text to Aphmau, wanting to start over and leave the past behind. However, she did not respond kindly to his text as his actions may speak more than his words.

In "Mommy's Surprise!", Aphmau's mom says she finally found Aphmau the right man. When Aphmau finds out it's Gene, things get awkward. Gene claims he's changed and that he regrets all he had done, but it's hard for Aphmau to forgive him. Gene starts hanging out with Aphmau to prove that he is sorry. Aphmau eventually forgives him and they both become friends.

Gene's first appearance in MyStreet Season 3 was in "Hot Guy Gets The Job!?". As Gene was looking for a job, he happened to get recommended to Aphmau's maid café by his brother Dante, due to the fact that Gene was not able to pay his rent, so he needed a job. Aphmau was surprised to see Gene, but since Gene wanted the job and had a good resume that was liked by Kawaii~Chan and Aphmau, he was accepted into the café's staff.

It was later revealed that he also had a job as a garbage man. While taking out the trash at Garroth and Laurance's house, they thought he was some kind of snooper and later trapped him.

When a new house was later available on the street, Garroth wanted to make up for his actions towards Gene and tried convincing his father to sell it to Gene for a fraction of the price. It wasn't until a large amount of garbage was teleported into the house and the person who was going to buy the house left that Garte agreed.

He did not make a physical appearance, but Aphmau said that Gene, along with Zenix and Sasha, were watching over the maid café while the others were at Starlight. He did however turn it into a night club.

Gene has black hair with bangs and dark teal eyes with noticeable bags under them. On the weekends, he wears a black long sleeved shirt with a white skull on it, gray pants and black shoes.

Gene wears a light dusty blue-like muscle shirt with light blue jeans. He also wears black shoes on his feet. His hair is a jet black color with bangs and his eyes are a dark blue shade. His overall appearance hasn't changed much, aside from his clothing.

Gene wears a red plaid jacket with rolled up sleeves and a black undershirt. He also wears jeans and black shoes. Under his eyes you can see bags. Gene's eye color has brightened up to a more light blue color than his previously dark blue colored eyes.

Gene manages to maintain an intimidating aura in whatever he does and is shrewd and callous. He finds amusement in blackmailing and taunting others who are more vulnerable than he is for his own personal gain, such as threatening to text a picture of Aphmau and Garroth kissing to Laurance if Aphmau did not introduce herself to his mother and pretend to be his friend, so that his mother wouldn't complain that his friends were bad influences. He also plans deep into revenge tactics.

He has a dark and sarcastic sense of humor and Laurance has described Gene and his friends to have melodramatic tendencies.

Gene seems to have gotten over his teenage rebellious years and is now a grown man with logic put in his brain. He is kind and truthful, even opening up about his love for Aphmau when he was a teen. He had a job interview on the island, being the only reason of him being there. He is kind to his younger brother Dante, who is blind about Gene's phase, though he or no one else no longer needs to speak of it. 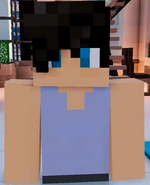 Add a photo to this gallery

Retrieved from "https://aphmau.fandom.com/wiki/Gene_(MyStreet)?oldid=157271"
Community content is available under CC-BY-SA unless otherwise noted.