Formerly Hayden's guard, she quit after a Guards Meeting and at some point became a Shadow Knight. She was caught trying to sacrifice Cadenza in S1, Episode 86 to open a nether portal, but she failed. She was "killed" by Aphmau but is still not confirmed dead.

As Hayden's guard, she had black hair, blue eyes, held a red sword and a green shield. She had on a brown jacket with a black shirt on under it, black gloves, and black pants with a belt.

She still has black hair, but her eyes have turned a dark brown. She wears the Shadow Knight armor and holds a Shadow Knight sword. 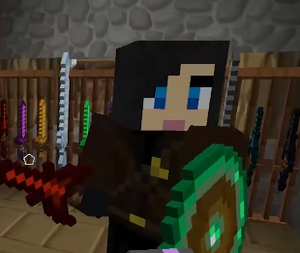 Retrieved from "https://aphmau.fandom.com/wiki/Glenda?oldid=155506"
Community content is available under CC-BY-SA unless otherwise noted.