Lady Irene's dimension made its appearance in Ep 100 of Season 1. Zane had used the amulets (The Necklace Zane gave to Alexis on episode 55 season 1 and the amulet Zane gave Kiki, that is now combined into a dimension-changing amulet) to come to the dimension, seeking the fabled Irene's Relic. With him he brought Garroth (Now a Jury of Nine member and loyal to his brother) Lillian and himself. Aphmau, Laurence, Kenmur, Emmalyn, Katelyn, and Aaron were teleported here as well.

Emmalyn got increasingly frightened as 1 minute there, is one year in the real world. They decided to go find Garroth and Zane, and stop them once and for all. They found Zane trying to use the Irene Relic, except it disappeared and re-materialized itself in front of Aphmau, only for it to be absorbed by her. It a fit of rage, Zane ordered Garroth and Lillian to kill them. Laurence got a hold of Garroth and tried to turn him back. Katelyn faced off against Lillian.

Finally Garroth turned back, only for Zane to get corrupted. Suddenly his eyes turned pure white, his clothes ripped and torn. His voice became extremely low toned and static. He also started emitting black particles. Just then the stranger made his way to Zane, locking swords with his, but he got pushed out of the way. Aphmau was knocked down just before a blood red portal appeared and a mysterious woman stepped out. Katelyn had managed to knock down Lillian, probably killing her. (him) Then Zane made his way to Aphmau, but before he could kill her, Garroth blocked his way, telling to her to "GO!"

"No! Garroth! I won't leave you!" His last words before the portal closed were, "Go Aphmau, my love. This is my fault, I've should've know better. Lord Aphmau, I love you. Now go be with someone that deserves you. I said go!" They finally all walked through the portal, closing on Garroth and Zane, only for them to fight it out to the death. It is still unknown who won, or if they can get him back. The portal was opened by Zoey, 15 years older. The portal still stands in the ruins of the old Phoenix Drop, but it is empty, no longer open.

Aphmau is still mad to this day because Garroth is stuck in Irenes dimension and cant get him back unless she gives up something very precious.She misses him so,but can see him while shes sleeping,but to her that is not enough...Unless someone else gives up their immortality or some sort of power to try to re-open the portal

At some point in time Lady Irene is seen talking to Hyria the witch which is also the first time we see Lady Irene.

On Episode 66 of season 2, there is an obvious connection between the banner symbol and the symbol on the stained glass window shown in the Irene dimension on the finale of season 1. Correct me if I'm wrong, but we can safely assume that this is probably Irene's symbol. Also, we can also assume that Aphmau is related to Irene or is Irene herself, as the Demon Warlock mentioned something happening between them that related to Irene on this special Island. Also in this episode, there was a whole town that looked abandoned.

On Episode 81 of season 2, Aaron went to the Irene dimension by the divine fragment to bring Garroth back and presumably kill Zane. He has shattered the Irene dimension,in doing so brought them back to the overworld. He killed Zane and himself with the fragment he had. But Zane is not dead.

Since then, we never saw or heard about the Irene Dimension again until, in the season 6 of Mystreet, When Angels Fall episode 14 part 2, the Demon Warlock teleported himself and Aphmau there to fight. After she stabbed him in the chest, surely killing him, they got brought back, but none of the characters questioned about it. 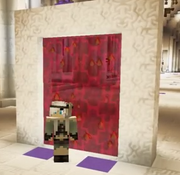 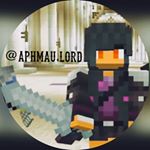 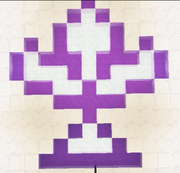 Add a photo to this gallery

Retrieved from "https://aphmau.fandom.com/wiki/Irene%27s_Dimension?oldid=151228"
Community content is available under CC-BY-SA unless otherwise noted.