Issa is the wife of Brendan. She is currently a mother to a baby girl named Dell. She first shows up in Episode 8 of Season Two, when Aphmau is looking for the Horse Shaman. The Horse Shaman turns out to be Brendan, who really has no hostility towards the Chicken Shaman.

She has long platinum blond hair, decorated with a red bow, as well as a crimson ribbon tied into a bow at the back of her head. Issa has bright blue eyes, though she also has very visible bags under them, so she presumably doesn't get much rest. (Probably due to her pregnancy.) She wears a white-and-black striped shirt under a cardigan with a red and yellow design, as well as denim shorts- an interesting choice, as she's pregnant- and brown leather cowboy boots.

She appears to be very friendly and welcoming, but emotional and often hungry, according to Brendan. This would make sense, considering her pregnancy. She also talks in a southern accent. 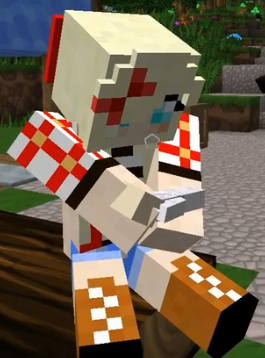 Retrieved from "https://aphmau.fandom.com/wiki/Issa?oldid=161151"
Community content is available under CC-BY-SA unless otherwise noted.