Ivan was once the boyfriend of Lucinda, he tricked her into believing he would help her make humans aware that not all witches and warlocks are evil. However, it was revealed that he was actually gaining energy from her own powers and causing evil. Eventually, Lucinda managed to destroy his physical form, but his spiritual presence remained, cursing an eternal winter upon Pikoro Village and the surrounding landscape. However, he manages to return in Season 2 Episode 55 and plans to inhabit a human body in order to become whole again. He does so, but is soon killed by Travis, who is able to use powers inherited by his father, the Demon Warlock, to get rid of him for good.

His appearance is unknown, due to his physical form being deceased. However, in his spirit form, he has pale blue skin, white hair, light blue eyes and a dark blue jacket. 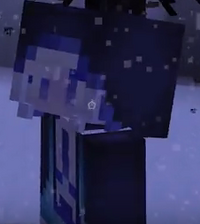 Retrieved from "https://aphmau.fandom.com/wiki/Ivan?oldid=126080"
Community content is available under CC-BY-SA unless otherwise noted.