Janus is part of the Jury of Nine and was better known as Janus the Silver Death, and the strongest and Zane's favorite juror.

Janus has been told to have terrorized the shoreline of Tu'la. He (told by Katelyn) Is easily the strongest member of the Jury Of Nine and Zane's favorite member. He did most of Zane's dirtiest work saying "it gave him a purpose".

We know not of his normal look but his Jury of Nine form is pale skinned with dead looking blue eyes and scars. He is surrounded with a blue light and wields two swords, one orange with a purple hilt, and one with a light blue blade with a blue hilt. In the rewrite, Janus's normal form is revealed: he has silver hair and scars across his face, with blue eyes. He holds his sword behind his neck. He wears Jury-styled armor with a gem in the middle. 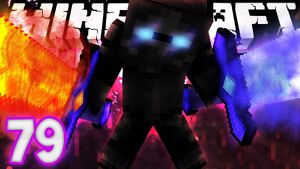 Retrieved from "https://aphmau.fandom.com/wiki/Janus?oldid=156245"
Community content is available under CC-BY-SA unless otherwise noted.