Start a Wiki
Kacey is a character who appears as a main character in Phoenix Drop High Season 2 & a minor character in MyStreet: Lover's Lane. He is the younger brother of Katelyn. A nice, loving, caring, young man.

He was seen first in MyStreet Lover's Lane in the episode "Don't Tell Mama!", where he was helping Sylvana and Eric move into the neighborhood, this is where we learn that he used to crush on Aphmau when he was younger. He is also mentioned in "Little Maids Club" by Kawaii~Chan telling Aphmau that he was spending some time with Katelyn at their house. Later in the episode, we see them together looking through photos of themselves from the time they were kids (between them there is the selfie Aphmau took in the first episode of PDH S2 even though that episode was not out yet at that episode's airing).

He appeared in the first episode of Phoenix Drop High Season 2 where he is the first main character other than Aphmau to appear. He had just started high school and got a special tour of the school by Aphmau working as a mentor and she introduces him to Garroth. Just after Garroth left, he met the remaining Shadow Knights, Sasha, and Zenix (since Gene had graduated) in an extremely rude fashion and then he was escorted to his classroom by Aphmau.

In "Omega", he overheard Ein and his friends talking about forcing Aphmau under his property once he wins the Werewolf Games and controls the school and confronted him, angered by how Ein is a bad person. He refused to back down when Ein demanded him to and slapped him. Ein retaliated by punching him really hard in the stomach, making him cough up blood on Ein's hand and breaking the werewolf-human fighting law of the school, causing him to wait for the ambulance in the next episode. This encounter is what caused Ein to get expelled as he was recording the whole encounter and caused his sister Katelyn to be enraged on what Ein did to him and because of Ein's actions, he was hospitalized for over a month near the end of his freshman year of high school.

He made a flashback in "My Real Name" as Katelyn remembered the horrible things Ein had done to him back in high school.

Kacey looks much like his sister, in the fact that he has a pale complexion and light blue eyes. He has light blue hair, but it can be mistaken for a dark blue at times due to his dark blue highlights.

Kacey is extremely timid and shows many signs of social anxiety or social phobia. He is also very quiet, as he can't get himself to tell his older sister, whom he seems to admire deeply, that he doesn't like sports like she and their dad does. He is also very kind and would up to people for his friends. 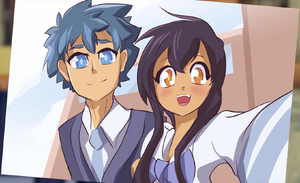 Retrieved from "https://aphmau.fandom.com/wiki/Kacey_(MyStreet)?oldid=159436"
Community content is available under CC-BY-SA unless otherwise noted.