It's a small ship combining Aphmau and Katelyn, but it's growing quite popular, such as in side series and MyStreet. It indicates there might be feelings between the two, and this is supported by the strong belief that Katelyn is Bisexual.

In the Ro'Meave Family arc, Katelyn pretended to date Aphmau, to further make their lie worse. However, Katelyn volunteered to kiss Aphmau without hesitation. While most of the guys think it's crazy, Travis replies that it's his OTP. This also hints that Katelyn might be Bisexual, but they claim each-other as sisters. In some Mini Games, Aphmau and Katelyn have flirtatiously teased each other. Some examples of this would be when they comment on how the other is cute or beautiful or hot.

In another instance where Katelyn tried to kiss Aphmau, she commented saying how they've 'done this before', and this suggests that Katelyn and Aphmau have kissed before. Katelyn and Aphmau have also talked in a minigame about how Katelyn apparently had a crush on Aphmau in college. Aphmau has stuttered and blushed before, after certain remarks from Katelyn. 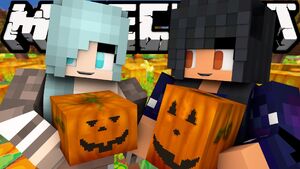 Retrieved from "https://aphmau.fandom.com/wiki/Katemau?oldid=129158"
Community content is available under CC-BY-SA unless otherwise noted.