We know very little about Kawaii~Chan's past, but we do know that she is a Meif'wa who set up several maid cafes in many towns, and came from the Tu'la region. She also had a rivalry with Lucinda because they had to compete against each other for businesses to stay open- as well as the rivalry between witches and magicks users. She also has a daughter named Nekoette~Tan with Dante, whom she married while Aphmau was in the Irene Dimension with Katelyn, Aaron, Laurance, Garroth, Emmalyn and Kenmur. Sadly, for the shippers of Dante~Chan, their wedding was not shown as a Minecraft Diaries episode.

We don't see her for a while until she makes up her mind and moves to Phoenix Drop to build her home there. When she gets there, she is assigned a home by Aphmau and immediately attracts Brendan's attention, who was sulking after the 'Sasha' incident.

Kawaii-Chan lacks in activity for a while until she begins and finishes working on Aphmau's home.

After that, she lacked in activity again. Then after Aphmau got back from the long journey that let her meet Malachi, Lucinda, Dante, and Nicole, Kawaii~Chan has a fight with Lucinda. This appears to be because of the rivalry mentioned before. They came to a tie, and made up but still have a friendly rivalry.

15 years later, we do not really know much about what she has been doing, but what we do know is that eventually, she and Dante got married and had a child, Nekoette~Tan.

In Season 3, she seen helping out with Alina's birthday party in episode 1 at Kiki's barn, and in episode 4, Aphmau asked her where her husband Dante is, and she says that he may be at the statue of Lady Irene. In episode 11, she was concerned for Dante about Shad and how he has to deal with him looking for Aphmau and Alina, Zane's return and his brother Gene. She memories manipulated by Gene, due to her eyes) talking to Gene like a close friend and brought Dante so he can meet his brother, to his horror.

Her memories were once again manipulated so this time, she doesn't remember Dante at all and only knows her husband, Gene as her sweetheart, all to get her real husband to search for Zane.

She is seen alongside the forest with Gene, where she suddenly left while Gene noticed Dante. Later, Kawaii~Chan, along with the other villagers, managed to recover from Gene's manipulation and rushed to stop Gene's attack on Dante, Nekoette and Dmitri, because Gene was distracted by Dante and her kid's arrival that he lost focus on the memory spell.

Kawaii~Chan and the kids were with Dante as they bury Kenmur's grave back at Phoenix Drop, reassuring him that he did the right thing to save future lives and not be depressed about the death of Kenmur. Dante is too depressed to listen to her so Dmitri and Nekoette asked Kawaii~Chan to leave Dante alone with them and she agrees.

She and others go on an island vacation. She starts to have a crush on Prince Reese because of his pink skin, but Polly gets jealous and uses a potion to turn into Kawaii~Chan and makes her look bad. In the end, everyone figures out it was Polly.

Aphmau, Katelyn, Nicole, Kiki, and Kawaii~Chan have a slumber party at Kawaii~Chan's house. Nicole plans to "spice things up" by inviting the boys who are disguised as girls using the names Laurencina, Dantette, and Garthena. The boys steal their pizza and the girls blame Nicole and Aphmau (They blame Aphmau because she opened the door for them, even though they told her too).

She works at IHOP along with Katelyn and strongly ships Aphmau and Aaron (Aarmau). Laurance and Garroth get a hold of her phone and sees her background photo is Aphmau and Aaron. But sadly, Garroth threw her phone out of the building, so she gets mad at them and made a few scratches on their beautiful faces, which shows that Kawaii~Chan seems to have more cat-like qualities than just two ears and tail.

Kawaii~Chan has long, light pink hair, golden-honey/amber colored eyes, black cat ears with pink ear innards, and a matching black cat tail. Her complexion is relatively pale. In both seasons, she appears to wear a magenta ribbon tied into a bow, around her left ear.

In Season 1, Kawaii~Chan sports a typical maid's outfit: a black dress and a white pinafore with ruffles around the shoulders.

In Season 2, fifteen years after the first season, Kawaii~Chan then wore a salmon pink dress with a white petticoat underneath, with white off-the-shoulder sleeves and black stitching across the torso of the dress.

In Season 3, eighteen years after the first season and three after the second, she now wears a pastel top and shorts. In the Episode “Not Forgotten” when she was mind-controlled her eyes are dark amber with red oval-line on it, which manipulates her memory from not to remember Dante and only wants to be with Gene.

She is seen as a selfless individual who is always offering to do things for other people, and happily puts aside her own work to please others. However, on the occasions that she upsets someone, though this is rare and usually the person isn't actually upset after all, she feels horrible and may even cry over her mistake. On the rare occasion that she is angry, Kawaii~Chan is prone to temper tantrums and bouts of aggressiveness and violent behaviour.

Kawaii~Chan also has a habit of talking in the third person, and applying Japanese honorifics to the ends of other people's names, such as Aphmau~Senpai, her nickname for Aphmau, or Katelyn~Sama, her nickname for Katelyn, which is what female Meif'wa tend to do.

Kawaii~Chan is known to have a kind of magic known as spirit magic. This type of magic is, so far, specific to only her in the series. Spirit magic allows the user to animate objects like dolls into living beings and be a servant to their designated owner. However, when combined with Zoey's barrier magic, it was able to turn Cadenza back into her human form (she was turned into a red chicken thanks to Castor the Chicken Shaman). 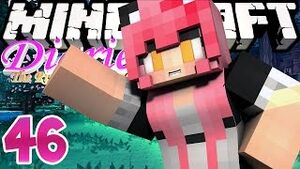 Retrieved from "https://aphmau.fandom.com/wiki/Kawaii%7EChan?oldid=157874"
Community content is available under CC-BY-SA unless otherwise noted.