In episode 4 of MyStreet, Krystal makes an appearance outside of Aphmau's door, greeting her to her as a new neighbor and gives a fruit basket to Aphmau. She lives in the house behind the house across from Aphmau (basically behind where Dante, Laurance, Garroth and Travis live). In this episode, we find out McCloud is her ex-boyfriend.

Krystal was also originally a character from Minecraft Isles.

In the episode, she wears the same pirate bandana from Isles, a gray scarf, a red shirt under a gray and white striped jacket, black shorts with red detailing and brown boots with light gray laces. She also has the same gold earrings she had in Isles.

She seems to have a rough and tough personality, but can be kind and cares for her brothers. 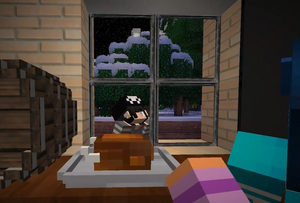 Retrieved from "https://aphmau.fandom.com/wiki/Krystal_(MyStreet)?oldid=125939"
Community content is available under CC-BY-SA unless otherwise noted.