This article is about the Minecraft Diaries character. For her revived form, see Aphmau.

Lady Irene is believed to be the most powerful being in the series. Some people believe that she's a goddess, like no one eles, but some people don't (For example, Dale).

Thousands of years ago, Lady Irene served the Ru'an region as a source of good. She stood for justice and peace and took the side to what she found right,

However, despite the Divine Warriors being gods amongst people, they succumbed to their human emotions. Irene and Shad were deeply in love with one another; however fate was a cruel thing, and the two were bound to eternal conflict, as Shad, a warrior of chaos and destruction, and Irene, a champion of good and peace. Irene despite this, tried to save Shad, throwing him into many different realms, but Shad always would find a way to break them, therefore, earning him the title "Realm Breaker."

Esmund was a shield of good, a protector, and fought alongside Irene through her battles. Esmund eventually found himself in love with Irene. This resulted in numerous conflicts between the three, and eventually, Irene could feel no love, even for those who loved her so dearly.

The other Divine Warriors came to the conclusion to kill Shad, hoping this action would rid the world of evil, and maybe, give Irene the power to love again. Shad found out about this and lost all his morality. He became a being of pure evil, "The Shadow Lord."

Irene took the battle into the Irene Dimension, and there, the Divine Warriors fought Shad. The battle was long fought and eventually, the Divine were able to defeat Shad and trap him the nether.

Irene, however, could not grieve for Shad's death. She could feel nothing, and as her friends took reincarnation, she wandered the world in emptiness.

Years later, Irene encountered Hyria and told Hyria of her one true desire, to feel again. Hyria told her to hide away her memories and take slumber in the Irene Dimension, until one day the world needed her again.

Thousands of years later, she awoke as someone who we all know and love as Aphmau.

Lady Irene appears again as a voice in Aphmau's head in Season 3 Ep. 27, when Aphmau lied to Lo about using magic. She showed disappointment at Aphmau's choice and wants her to use her power that Aphmau feared. When Aphmau refused, Lady Irene then took over, causing Aphmau's eyes to turn pure white and break free the cell and save Lo, though it is uncertain if the voice belongs to Lady Irene.

She appeared again when Aphmau is caught and imprisoned by Lord Janna and her warlock, this time, Aphmau acknowledged that the voice in her head is Irene. She explains that in order to save Hailey now, she must do what Laurance did to her at her forced wedding in "The Vows We Take"; Aphmau must create a massacre and go berserk. After hearing Aphmau's anguish, blaming herself for all of her plans to go downfall, Lady Irene asked if she's ready in which Aphmau is prepared to unleash everything. Irene then slaughtered the guards and demand Lord Janna to surrender, only to knocked down by her as she studied dark magic to defeat Aphmau, but Irene declares that she is the goddess and none shall defy her and eventually Aphmau passes out afterward.

Later in a black void, Aphmau tried to confront Irene, demanding why she has to bear the identity of a Divine Warrior. Irene refused to show herself and only gave a vague response to her question; she simply states that the reason why she can’t show herself and answer her question is that she isn’t mentally to accept her fate as a goddess. She told her that if she wants to find answers, she must go to Enki Island and head to the library which there was nothing of use here to help Aphmau.

She is believed to be seen in the Season 1, Episode 100: "The Amulet's Secret" If you go to the video and take a picture and see the picture on the Lady Irene tab she is Lady Irene. But it was actually Zoey who looked different because Irene's Dimension time travels much faster, one minute being one year in the Overworld.

In Season 2, Episode 46, she was seen in her dimension talking to the witch, Hyria. This is the first time Irene is seen alive in person, instead of as a statue. She has a similar skin tone to Aphmau and long black hair that partly drapes over her shoulders to her waist (similar to Aphmau). She wears a dark blue hood with a gold trim that appears to end above her waist. Under her cloak, she wears a long white dress and is also seen wearing golden bracelets. During the episode, her face and a large majority of the front view of her body are not shown.

In Season 2, Episode 48, "Sons of Phoenix Drop", there was a statue of lady Irene at the end of a large wooden table belonging to Trall, the leader of a thief camp. It was said that Trall worshipped Irene and, despite being a criminal, looks up to her and her reputation. He even managed to hint that Aphmau is Lady Irene when she transforms into her Divine Form.

In Season 2, it has been said that Aphmau IS Lady Irene since Aphmau looks like Lady Irene herself. This is further supported when Aphmau had a flashback of memories of her, this time her full face is shown. She has the same amber-brown eyes and black hair as Aphmau, with the exception that her skin is lighter as opposed to Aphmau's tanned/Hispanic complexion.

Priests believe that Lady Irene was a very kind and fair woman. She saved many people and was extremely powerful in terms of Magicks and Witchcraft, even creating a great relic and her own dimension in which a minute there is equal to one year in the normal dimension, the Overworld.

In Season 3, when she is observing Aphmau, Irene can be a bit forceful and cryptic. She decided to take over Aphmau's body and break free from the jail cell when she refuses to use her magic and took over again to slaughter Lord Janna's guard and forced her to repent. Irene also refused to be blunt about answering Aphmau's question when she confronted her in episode 28. All of this behavior is due to how disappointed Irene is about how her body refuses to accept her memories and want to live as a separate entity, and is forcing Aphmau into becoming one with her memories back as the world is still against her. 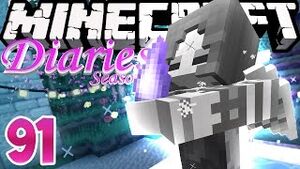 Retrieved from "https://aphmau.fandom.com/wiki/Lady_Irene?oldid=157398"
Community content is available under CC-BY-SA unless otherwise noted.