Start a Wiki
Lillian is the quinary antagonist of Minecraft Diaries: Rise Of Phoenix Drop.

Lillian has an unknown past. Arriving at Aphmau's village walls, appearing to be a fortune teller, friendly and welcoming, Aphmau lets her stay. Lillian turns out to be a spy as she turns Garroth to Zane's side by manipulating him.

Whether she has some sort of illusion magicks, shape-shifting magicks, or otherwise, no-one knows, except the woman herself. She also is the person who made them go to the Lady Irene's Dimension in the first place. She might have a crush on Garroth by how she stares at him. Katelyn most likely killed her in Irene's Dimension as her body is seen on the floor as the group leaves with Zoey. Lillian's Jury of Nine name is currently Lillian The Silver Scythe.

She does not appear in Season 2.

She has long curly, raven black hair, often obscured by a hood. Her eyes are a light blue. She can change form, however, this is just one of her forms. In reality she is the "Masked Man".

Very little is known about her, except that she works for Zane. She probably is very manipulative, seeing how she convinced Garroth to join Zane after tricking him into seeing a fake Aphmau and a fake Laurence kissing. She is very smooth in her actions and isn't one to flinch. She and Katelyn had a small encounter in S1 on the docks, wherein Lillian drew a scythe on the other woman. While she was rather collected and calm during this event, Katelyn does mention several times that Lillian was rather powerful. During the conversation Lillian also mentions her distaste and scorn for the Jury of Nine. 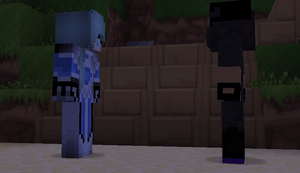 Retrieved from "https://aphmau.fandom.com/wiki/Lillian?oldid=155352"
Community content is available under CC-BY-SA unless otherwise noted.