Lily was the wife of Aaron, the Lord of Falconclaw. When her son, Jacob, was given an amulet by Zane, Aaron took it from Jacob in order to inspect it, when there was a blinding light and after it subsided, Aaron found that Jacob, Lily and the rest of the village were dead.

Lily was the daughter of Aaron's head guard. She knew him since when they were young and has been his friend. On their first date, he gave her a lily as a gift. After she died, he would go to the forest where there are lilies and think of the days when they were still carefree and happy.

Aaron also mentions to Aphmau that Lily had always wanted a daughter and so when Aphmau went to a cave on the island she visits in Episode 62 of Season Two, when she discovers an orphaned baby, she decides to name the child Lily in honor of Aaron's deceased wife, but then Aaron claims that Lilith would have been the name that Lily would have wanted for her own daughter and thus the name was changed.

Lily has a fair skin, dark brown hair and cyan eyes. In Aaron's flashback scene, she is shown wearing a beige and brown laced dress.

She is implied to be a caring and kind mother. 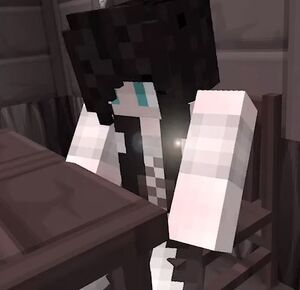 Retrieved from "https://aphmau.fandom.com/wiki/Lily?oldid=160898"
Community content is available under CC-BY-SA unless otherwise noted.