Lord Luke is the Lord of Pikoro Village and the father of Lucinda. He first appears in S1, E74 found on a Shadow Knight altar under the Pikoro Village well. He was in a deep slumber that Aphmau could not wake him from. Sensing Lucinda, he wakes up. It was found out that they had some troubles together, as it seemed that Pikoro village had hated Witchcraft users for some reason, and Lucinda was one.

As of S2, his current status is unknown. However, he appears very old and might have already passed away.

He has bushy white eyebrows, a white mustache, gold and black shackles, no shirt, and black pants. He is nearly bald.

He is kind but wants to rip Zane apart. He doesn't think before he acts, as seen in Episode 99.

He apparently cares a lot for his daughter, but they get in arguments a lot. At first, Lucinda was mad at him for kicking her out, but he was just doing the best for his village and his daughter, and they eventually made up. he was sincerely sorry, and even Lucinda stopped arguing with him, which means that he could be quite persuasive but also a little stubborn. 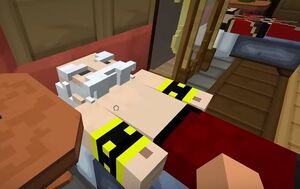 Retrieved from "https://aphmau.fandom.com/wiki/Lord_Luke?oldid=150376"
Community content is available under CC-BY-SA unless otherwise noted.