He is first seen in Season 1 Episode 92, when Zane comes to Scaleswind to inform him where his daughter is. He is the father of Nicole. His real name is unknown.

As of Season 2, he is deceased, having died of old age. Nicole, his daughter, became the new lord of Scaleswind

He has light gray hair going around almost all of his face and has a light gray goatee. He wears a black headband around his head and black armlets, he has white gloves with brown edges around them. His shirt is blue, but it appears to only cover half of him with some gold spots on it. He has black eyes.

He gets very protective when it comes to Nicole. He can also lose his temper easily, leading to the war with Phoenix Drop. 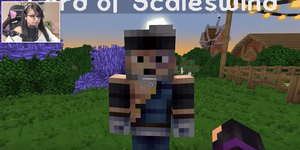 Retrieved from "https://aphmau.fandom.com/wiki/Lord_of_Scaleswind?oldid=148618"
Community content is available under CC-BY-SA unless otherwise noted.