She is first introduced in MyStreet Phoenix Drop High Season 2 in the episode "Lover Boy", she was standing in front of the werewolf club stand when she said to Aphmau to "hold it right there" and introduces herself. Aphmau being stuck between the other werewolves, she took the chance to challenge her to win the title of Alpha Female within the high school. She asks for Aphmau to show her true form (tail and ears), but Aphmau can't since she got them last year by the effect of a potion. Seconds later, Kai appears from between the stands and tells her that she's causing a scene for his friend. She answers by advancing that "these are werewolf matters" and that he shouldn't interfere, but he does anyways by throwing a ball behind them. The werewolves end up laughing and Maria states that they aren't pups anymore and that this was the dumbest idea she's ever seen. However, as she says that, she discovers that they left while they were all looking at the ball.

In Ep.4, she's tracking down Aphmau throughout the school in order to challenge her. She appears hiding behind lockers not far from where Aphmau was standing to read her schedule, but she let her own drop onto the floor, so a passing by mentor student gave her back. That also took her too much time, enough for Aphmau to move on and Maria to lose her. Later after lunch she tries again, but Aphmau looks away just a second while Maria was charging on her, so she misses completely and wets herself from the fountain as water spreads everywhere as she punched it. She then claims that Aphmau is smart, but she'll try until she gets her.

In Ep.7, Maria appears in the middle of Aphmau and Ein's kind-of date (where they were only supposed to be hanging out) while they were eating. Unfortunately for Maria, she came hungry. She almost got caught but hid behind a corner, just after Aphmau and Ein had left. She jumps out and challenges Aphmau, then while she was talking about Aphmau feeling her wrath and whatnot, Aphmau offers her a taco like food. Maria says that she loves tacos and takes it, thanks Aphmau and eats it. Maria states that good food is her one weakness and that she can't fight her now. Aphmau then tells her about the sale on this food from a store behind her and Maria got all over the idea of the sale. So, once again, she is taken off course from her prey. But after 4 steps in that way she realizes that she was tricked, so turns around to only discover that Aphmau and Ein had left.

In the episode "Omega", she is again shown, trying to get away from two werewolves. That's when Aaron steps in and punches the two werewolf boys, saying for them to leave her alone. She doesn't realize that was Aaron until he walks away.

In the episode "Ultima", Maria finds out that Aaron is actually a werewolf, but no one knows if she told anyone about that. Only her, Daniel and Ein knows that Aaron is a werewolf, until later in the future, Aphmau and the "others" figures out.

In the episode "Werewolf Kiss?!", Maria is now older. She has moved on from challenging Aphmau to Aaron. She is still fearless as ever. Maria has now dyed the top part of her hair.

In the episode "Always Be The One", she is shown again, this time she races with Blaze to the gift shop.

She has brown hair that turns blonde near the edges, yellow eyes, a dark yellow tail and dark yellow ears with pink and purple insides.

In school, she wears the regular women uniform.

In Ep.7, in the mall, she was wearing a dark brown tank top slightly open on her midriff, green pants and black shoes.

In MyStreet Starlight, Maria has dyed the top part of her hair a bright color which we presume is yellow. She wears a yellow and purple striped bikini.

Strangely, Maria looks like Aaron's Sister, Melissa. Jess (Aphmau) says that it was a coincidence that the two looked very much alike.

She is a fearless woman. She never gives up on challenging Aphmau for the title of Alpha, even though she has never gotten the chance to because of distractions. She likes big talks and can easily be taken off course from her doings. She tries to challenge Aphmau to the position as Alpha Female, but she loses due to her own distractions.

Maria's personality has not changed even when she is older. This time, instead of challenging Aphmau, she likes to challenge Aaron. Maria has grown more kinder to Aphmau when they meet again in MyStreet Starlight. 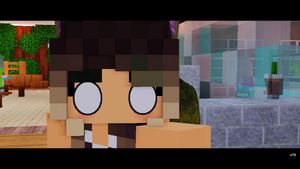 Retrieved from "https://aphmau.fandom.com/wiki/Maria_the_Werewolf_(MyStreet)?oldid=152194"
Community content is available under CC-BY-SA unless otherwise noted.