To be as annoying as possible

Meowki was Aphmau's first cat. Its gender is unknown, but is presumed to be a female. Meowki lived a very short life and was killed by a skeleton that was attracted to her litter box. Aphmau got over it quickly by making a "Meowki II".

She, along with some of Aphmau's other cats, were very aggressive towards her. This is because they get mad when they don't get fed, even though Aphmau tried her best to feed them.

Meowki was a calico cat with green eyes.

Very stinky with his/her litter box (if you leave a litter box uncleaned for a while in Minecraft, it attracts mobs), also very annoying with her constantly getting stuck in trees, needing help and meowing. 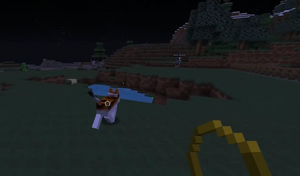 Retrieved from "https://aphmau.fandom.com/wiki/Meowki?oldid=151445"
Community content is available under CC-BY-SA unless otherwise noted.