Mittens is the Crazy Cat Lady's or Urla's favorite cat. In episode 26 of season one, he is splashed with a mysterious potion that made him large. The Crazy Cat Lady gets furious at Aphmau and sends her out to get a potion to return the cat to it original size. Later on, Aphmau gets the potion and the cat is returned back to normal. You see Mittens almost everywhere with the Crazy Cat Lady.

In Season 2, it's most likely that he died with Urla, but that's still up to debate.

Mittens is an orange tabby with green eyes and a white chest, paws and underbelly.

Mittens likes to hiss at Aphmau and is generally a mean cat. 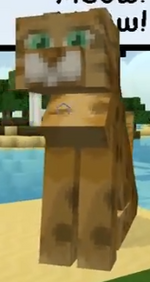 Retrieved from "https://aphmau.fandom.com/wiki/Mittens?oldid=125546"
Community content is available under CC-BY-SA unless otherwise noted.