If you're looking for the actual school, Phoenix Drop High, click here.

MyStreet Phoenix Drop High, shortened as Phoenix Drop High or PDH, is the prequel to MyStreet and a spinoff of Minecraft Diaries. It premiered on March 17th, 2016, and ended on June 22nd, 2016.[1][2]

The series takes place before the events of The Big Move and MyStreet, specifically during the high school years of the characters.

It was originally going to premiered on March 16th, 2016,[3] but due to the episode being incomplete, Aphmau delayed the first episode one more day and uploaded a video featuring prominent MyStreet characters.[4]

The series focuses on MyStreet characters, their history of how they met, as well as how each character came to be. The events that take place mostly connect with Season 1 and all of Season 2 of MyStreet.

The series focuses on the characters' journey through high school and their path to adulthood.

The series was going to receive a sequel as Aphmau, Dom and the production team were in favor of expanding into a second season. However, it was ultimately scrapped in favor of a new high school setting series with brand new set of characters.

Following the second season, MyStreet has been dropped from the title of the episodes.

Characters of Season 2 (Some from Season 1)Edit

Here is the complete list of all of the 18 Clubs that are available at Phoenix Drop High:

After "Weekend Friends!", the schedule was broken due to Minecraft Diaries taking more production than expected. The next episode took 4 days to premiere due to a new series that premiered; Minecraft FanFic Readings.

On the minigame episode "Katelyn's Boyfriend", Aphmau announced that the series and Minecraft Diaries are to follow a four-day schedule because of the upcoming gaming event PAX East 2016. However, the minigame episodes would contain lore to the series. This continued from April 3rd to May 1st.

From May 1st to June 6th, the three-day cycle returned. However, due to the premiere of MyStreet Season 2, in its place was another episode of Minecraft FanFic Readings, with the next episode of Phoenix Drop High releasing on June 10th and from there the schedule would return. 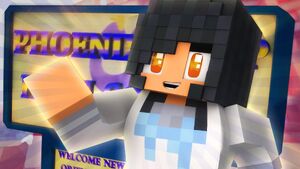