The second season of MyStreet Phoenix Drop High premiered on February 11, 2017 and concluded on June 2, 2017.

The season was announced on Aphmau's second channel, Aphmau Vlogging.[1]

During the video, Aphmau hinted the season to be connected with the fourth season of MyStreet. The season may focus on the newly-introduced characters such as Kacey, Kim and Ivan, who attended Phoenix Drop High. She also added that the season is going to be interesting and different.

As of this season, the series has dropped MyStreet from its title.

It is unknown if this season replaced the previously announced high school series in "Jessica's Day Off". In the same video, Jason also said that the team would like to continue MyStreet Phoenix Drop High but discarded the idea due to the episodes connecting to the MyStreet timeline with a few inconsistencies.

Two months later, the statement was discarded as this season was announced and is now currently airing. The season was likely made to fix these inconsistencies and expand the story for the characters introduced in MyStreet: Lover's Lane.

Unlike the last season, this season heavily focuses on characters outside the main cast of MyStreet.

Aphmau enters her Sophomore year with the duty as being the Alpha of the Werewolves of the school. Early on, she has a hard time managing her social and school life with the title as Alpha due to the different culture differences between humans and werewolves.

Introduced in the middle of the season is Blaze, a rash, loud, and sometimes obnoxious Werewolf who was one of the candidates for Alpha Male of the pack. Lastly, Aaron also played a major part in the season. He attends his first year of college, making it difficult to connect with Aphmau due to different time and pressure from his family. He plays a part in the finale of the episodes as he is a support of Aphmau.

The season also introduced new characters of MyStreet: Kacey, one of Katelyn's younger brothers and a freshman who harbored feelings for Aphmau. Ivan, who is Lucinda's at-the-time-boyfriend, and Kim, a shy and quiet girl who admired Laurance.

Episodes for the second season were released on a 3-4 day cycle.

Like the previous season, this season had 30 episodes, with the finale ending in a two-parter.[3] 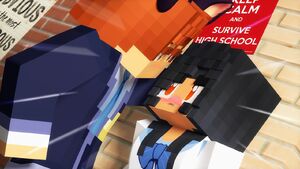 Retrieved from "https://aphmau.fandom.com/wiki/MyStreet_Phoenix_Drop_High_Season_2?oldid=154823"
Community content is available under CC-BY-SA unless otherwise noted.