The nether is the place where the Shadow Knights and the Shadow King were banished to after they were defeated by the Divine Warriors in the War of the Magi. The Nether is also the place where Shadow Knights are either created, like Laurance, or reborn as a shadow knight, like Vylad or Sasha. They are currently still being held there trying to gain the strength needed to take back the Overworld. The Nether is a very hellish place full of nether rock, Zombie Pigmen, Ghasts, and other very bad creatures. It makes sense considering that's where the main antagonists of the series live. This place is also where Laurance was forced to become a shadow knight. Laurance was held back in this place because of the Shadow Lord, but then returned after a short period of time, blind. 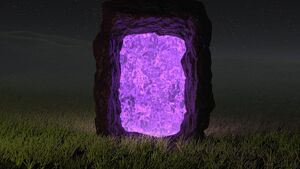 Retrieved from "https://aphmau.fandom.com/wiki/Nether?oldid=129100"
Community content is available under CC-BY-SA unless otherwise noted.