He was first introduced in PDH Season 1 Ep. 2 standing in front of the werewolf club stand and he probably appeared here and there within the following episodes. At the time we didn't know his name yet, but later in Ep19, he and a werewolf girl were in the classroom talking about the Alpha female (aka Aphmau), although he was not on screen for too long.

He got a lot more camera time in the final episode of the season when he was invited to a party at Aphmau's house by Katelyn and Kawaii~Chan, but got forced to leave because Aphmau wanted it to end before she gets in trouble and so she called Aaron who told everyone to leave, but he said "Eh, no one makes me leave a party." and so he got reminded who the Alpha is, by Aaron throwing him out through the window. He then comes back just a minute after to apologize.

In PDH Season 2, he appeared in Ep.3 when he and his werewolf friends (Dottie and Daniel) standing in front of the werewolf club stand, had just caught Aphmau between the stands to ask her a few questions. They get interrupted by Maria who came to challenge Aphmau, moments later Kai appears to get Aphmau out from there and decides to throw a ball behind them all, Maria, Dottie, Daniel and Rylan didn't get the reaction a pup would have had, instead they just stared at the ball and laughed.

In Ep.5, he is seen sitting in the back of the classroom Aphmau is in at the beginning of the episode. After class, the group of friends go talk with Aphmau and Rylan particularly asks her if she'll be at the werewolf club after school. Next episode, the trio is at the werewolf club accompanied by Aphmau and other werewolves, he and Dottie were asking Daniel how he marked his locker (hoping it wasn't like a true werewolf). Thankfully he had done it the way any werewolf would.

In Ep.7, he appeared at the mall with Dottie while Aphmau and Ein were walking and they told Aphmau that they wanted to hang out with her, but they learn that she was with Ein (the Omega, that Aphmau didn't know about yet) and so says that "We'll leave you two be".

When Ein became Alpha and made Daniel Omega, he defended him. He offered Jax and Ryder his lunch money when they were bullying Daniel.

Present, Rylan remains the same and plays a very minor role in the more recent series.

In Ep 6, it is said that Rylan was on the beach with Daniel when the GF flew in. Maria tried to save them both but was only able to save Daniel. So Maria and Rylan were detained by the GF.

He has brown hair, reddish brown eyes, the main color of his tail, and ears are purple and his ears are changing to a lighter purple towards the inside. He also can hide his tail and ears.

In school he wears the standard male student uniform.

In the S1 Finale he came to the party with a green pull and black pants.

In Ep.7 he was wearing a green and black pull with torn black pants and white shoes.

He's very energetic and over the top, much like his friends and is a total party animal despite him being bad at throwing parties. However, when Dottie and Daniel mention his crush, June, he becomes extremely flustered and refuses to talk to her. 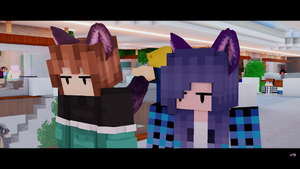 Retrieved from "https://aphmau.fandom.com/wiki/Rylan_(MyStreet)?oldid=161580"
Community content is available under CC-BY-SA unless otherwise noted.