Aphmau's pet hamster Kiki gave to her. He was affected by a strange growth spurt when Sasha threw a potion on him. Finally, when the Lady Irene statue was created and the darkness was purified, he shifted back to his normal size and went back to live with Kiki and Cuddlezilla in Kiki's barn. As of season 2, his status is unknown. (He may be deceased, as on average, a hamster will live for around 2 to 2.5 years.)

Sean has black eyes, a white underbelly, and orange/cream fur on top. He was larger than a normal sized dog for a short period of time before going back to regular size.

Very active and playful. He liked to ride on Aphmau's head before he was affected by a strange growth spurt when Sasha  threw a potion (presumably a growth potion) through Aphmau's window. Enjoyed playing with Kyle and Brendan's pet hamster, Cuddlezilla. 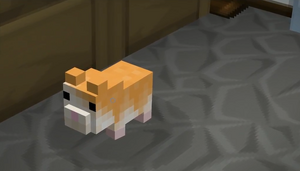 Retrieved from "https://aphmau.fandom.com/wiki/Sean_Connery?oldid=159292"
Community content is available under CC-BY-SA unless otherwise noted.