Tatiana was at one point a pure blooded wolf. However, her pack was raided and almost completely wiped out by Ein, but she and her sister the omega stayed alive. She was turned into a human under a spell which lasts a long time. At first she raided the cabin only to find nothing. She is then seen when Aaron saved a wolf pup that Ein had left for dead. Later, she appears again when Aphmau and Aaron are in the cold she leads them home. She took care of Aaron, much to Aphmau's jealousy in a nearby cave, then mention that he's special. She was once again seen when Aaron came to defeat Ein after noticing Aphmau's strange behavior and green eyes and followed her to a house. She warned them not to and then turned pure human. She is then seen screaming not to go and not to leave her alone. Tatiana then attempted to attack Ein, who was harassing Aaron using a now evil, brainwashed Aphmau, but Ein deflected her to the wall.

Tatiana teamed up with Lucinda when the latter was ambushed by wolves controlled by Ein and was struggling to deal with them as Aaron heads off to face Ein and Aphmau. When he loses his werewolf identity, she regains the leadership of alpha and orders them to attack him which they do so gladly.

After things went back to normal, Tatiana had asked Lucinda for help to turn her back into a wolf. Lucinda, who was not very experienced with potions, could not do anything to help and started to blame herself. Tatiana told Lucinda she did what she could. Lucinda then offered to ask Derek to make Tatiana a werewolf. Tatiana declined the brilliant idea and the only hope of being a wolf again. Tatiana told Lucinda that her pack would still accept her, no matter what form she took.

She seems content as she is still accepted by her pack as Alpha and is able to still be with the wolves despite her permanent human form.

As a human, Tatiana has black hair with a white fringe that covers her left eye. Her eyes are first seen as green, but this is because she was under the effects of the forever potion. When the effects became permanent, they turned red, which is their natural color. She has a tan complexion.

Tatiana wears a hooded crimson robe with red and gold detail and black sash goes across her stomach.

She is very calm and reasoning. She also seems to really care about her pack and is protective of it. Although she seems mysterious and thought to be a potential lover to Aaron, Aphmau and the gang, she eventually decides to join sides with them after revealing to Aaron, Garroth, Kim and Lucinda that she also wants revenge from Ein. 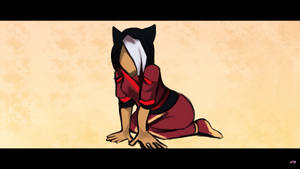 Retrieved from "https://aphmau.fandom.com/wiki/Tatiana_(MyStreet)?oldid=152712"
Community content is available under CC-BY-SA unless otherwise noted.