Thorgi was Aphmau's first dog. He was spawned using a Doggy Charm. It is believed that he is the leader of all of Aphmau's dogs. He has gone with Aphmau on the most of her adventures, and some say that she loves him most.

In Season Two Episode 25, we see Thorgi was still alive as he had waited to see Aphmau for 15 years. He died in Aphmau's arms. He had been the only one of her original dogs in Season 1 to still be alive in Season 2, fifteen years from then. He had puppies with an unknown female corgi. One of those puppies was named Thorgina, who was described by Kiki as a "daddy's girl". She was adopted by Aphmau.

Thorgi has the default tamed wolf skin with a indigo collar. In Season 2, Thorgi's coat has whitened, and his collar is a magenta.

Thorgi is playful and loyal. He is assumed to be a leader-figure among the other dogs. 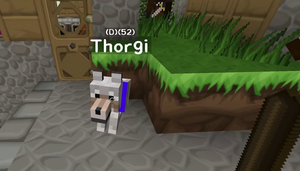 Retrieved from "https://aphmau.fandom.com/wiki/Thorgi?oldid=154437"
Community content is available under CC-BY-SA unless otherwise noted.