Vischer is first seen in Season 1 Episode 5. He died when docks exploded in "Docks in Danger". He lived in Bright Port with his wife, Merida and his son, John. After he died we found out that he was a werewolf.

Vischer has light brown hair and a beard, green eyes and a white short sleeved shirt under dark blue overalls with gold buttons. He also wears a brown belt with a gold buckle on it. 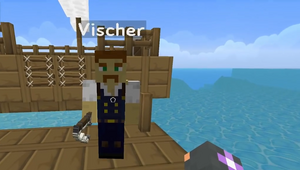 Retrieved from "https://aphmau.fandom.com/wiki/Visher?oldid=153487"
Community content is available under CC-BY-SA unless otherwise noted.