Vylad is a Shadow Knight appearing in Minecraft Diaries Season 1 and Season 2. He is a traitor to the Shadow Knights and responsible for Levin ending up with Aphmau and finding Phoenix Drop. He says he has done horrible things in the past, but Aphmau can tell that he has a good heart.

Vylad is the younger half-brother of Garroth and Zane. He said that he was on good terms with Garroth as a child, but Zane did not like him, and pretended he didn't exist.

Vylad was the one who led Aphmau to Phoenix Drop during episode 1, and throughout early Season 1, Vylad is seen watching Phoenix Drop before he is eventually taken by the Shadow Knights for betrayal.

In Season 2, Episode 61, we learn what life was like for Vylad as a child. A little after Garroth and Zane were born, Garte, became very involved in politics and creating O'Khasis into a kingdom. He started to become more involved with work, and ignored his family and Zianna's feelings. Garte turned malicious and treated Zianna horribly. Zianna pleaded him to change his ways and to go back to his old self, but Garte ignored her. Zianna found comfort in someone else. She felt guilt and told Garte, but by that time she was pregnant with Vylad. Vylad tells Aphmau that this probably snapped him back to reality because during his younger days as a child, Garte treated Vylad as his own. Over time, Garte changed again and disowned Vylad because he was a product of Zianna's affair, and he still feels like this in the new Season 2 episodes.

When Aphmau knocked Zenix unconscious while trying to rescue Lord Burt, Vylad came in and took Zenix before vanishing in a cloud of smoke.

In Season 2, Vylad shows up behind Aphmau in Episode 37, and Aphmau learns Vylad is alive and is Garroth's younger brother. The theories about Vylad, Zane, and Garroth being brothers are true. Vylad explained that Garroth was always kind to him even though they are still half brothers and he treated him like a real brother, unlike Zane, who basically just ignored Vylad like he was invisible.

Vylad knows who Laurance is as they were both trapped in the Nether being converted to Shadow Knights. Laurance promises him that he will help him escape, but was never able to as Ungrth came and rescued him alone.

In Episode 44, Aphmau returns to find the villagers of Nahakra in panic at a meeting. She overhears the news of the invasion and immediately returns to the inn where everyone resided. She gets told by Laurance, Vylad had wandered off as soon as they left the ship.

Aphmau goes looking for Vylad throughout the village of Nahakra, she notices him throwing books into a fire from atop a roof. He burned the books to protect them from the Tu'la king and his armies, since they mentioned the villages such as Phoenix Drop and Meteli. He had burned some books in O'Khasis, but the main reason he went was to see his mother, Zianna. In O'Khasis Aphmau had heard there was an adoptive child and she asked Vylad if that was him. He responds "Garroth, Zane and I we share the same mother. However Garte is their dad he adopted me when he found out I wasn't his." He shows Aphmau a map of the region to navigate their way back home.

A little note: As of Season 2, Episode 82, Vylad and another Shadow Knight, Laurance, are declared missing, but Vylad returns an episode later.

In Episode 83, he managed to drive away Ivy and the wolf man in his Shadow Knight form and the episode afterwards, he explains to Aphmau and Garroth that Laurance is missing due to the Calling reaching out to him and slowly starting to lose his mind.

He briefly stated in Episode 96 of Season 2, that he died by being stabbed in the back, though the killer is left unknown.

In Minecraft Diaries, he wears a dark green outfit, brown gloves and boots, and a holster belt. He also wears a black hood and a brown mask.

In MyStreet, he wears a purple-red long-sleeve shirt with blue jeans, a brown sweater, and a green scarf.

He has several outfits in Phoenix Drop High. In school, he wears a white shirt with a light blue tie, dark blue vest, and grey pants. When not in school he wears: a long sleeve green shirt, blue jeans, and a blue sweater (but with short sleeves).

A mority of the characters created by Aphmau can almost always be linked with a specific color, for Vylad, this would be green. He is most commonly seen with a green scarf around his neck in most series.

Vylad seems to have a good heart similar to Laurance, as he helped Matilda and saved Levin, but he also appeared to help the Shadow Knights at the same time. It is unknown where his loyalties lie. He has looks very similar to Jeffory and Malachi. This does lead to a handful of people starting to come up with theories about them being related, but they are quickly dismissed from most people as Vylad didn't say anything, and he seems to be on Aphmau's side, but you can never be too sure about anything, until it is mentioned in the certain series.

Despite appearing as cold, Vylad is a blunt and logical person. He found the wedding of Emmalyn and Kenmur a waste of time due to the inevitable invasion of the Tu'la region. He was bold with this statement as he believes that time is of the essence from the nearing brink of war. Although the truth is painful, he would rather reveal the painful truth than see innocent ones run blindly.

Vylad is a very caring and kind person. He protects those whom he considers close, such as his mother, Zianna and older brother, Garroth.

Intelligent and quick on his feet, Vylad is bright character. When the Tu'la invasion began, he immediately ran into the Nahakra Village library to burn their books. The action was to burn any mentions of villages, to prolong their time before Tu'la continues their terror.

In MyStreet, unlike his Minecraft Diaries counterpart, is extremely hyperactive and rambunctious. Being very excitable over everything. He values his loved ones, but prefers to be cut loose from them, with little to no contact with them. In minigames, especially with fanfictions, he shows no shame with having to say embarrassing lines or kissing others.

In Phoenix Drop High, his smarts are shown when he mentions that he got to skip a grade an move up into being a freshman from middle school. 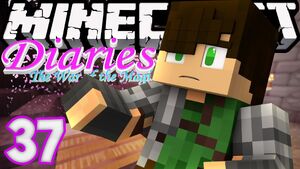 Retrieved from "https://aphmau.fandom.com/wiki/Vylad?oldid=154739"
Community content is available under CC-BY-SA unless otherwise noted.