A Werewolf (also known as a lycanthrope or a lupine) is a human with the ability to shapeshift into a wolf, either as a result of genetics (e.g. one or both parents are werewolves) or after being placed under a curse or affliction (e.g. via a bite or scratch from another werewolf). Though werewolves can transform into their wolf forms and back to their human forms again at will, the transformation appears to happen automatically when a werewolf is exposed to the full moon.

The alpha male is one of the leaders in a high school Werewolf pack. He can gain the role of Alpha when either of these things happen:

The alpha female is another one of the leaders in a high school Werewolf pack. She can gain the role of Alpha when either of these things happen

In the wild, a Werewolf pack only has one alpha. The reason why a high school pack has two is so they could have a better understanding of the role.

A Beta is often the soulmate of the alpha. There are some cases where betas are family or close friends of the alpha. The Beta is respected by the other werewolves in the pack but respects the Alpha just like the others.

The sidekicks of the Alpha Edit

There has only been one time in Werewolf History that the Alpha has sidekicks that will fight for his own battles. That was when Ein (A former Omega) became Alpha under the permission of the former Alpha (Male) Aaron Lycan. Ein had sidekicks by his side when he was Alpha. His sidekicks were sometimes more than five. Ein used his sidekicks to help fight his own battles and to bully other beings. Having sidekicks or people by your side all the time when you are Alpha, makes you considered by all werewolves as a weak, selfish coward and a humiliation to Werewolf kind.

The Werewolves (Not including Alpha, Beta and Omegas) Edit

The omega is considered the lowest stage of the pack. The Omega is the werewolf that usually gets teased, bullied, etc. The alpha male can also be omega when he is alpha, as Aaron was in Pheonix Drop High season 1. The omega is a helper to the pack. He/She has to tend to the werewolves' needs (Eg health, food, etc). There can be more than one omega in a pack. But the max number of omegas in a pack is three. The omega can gain the role of omega by doing the things below:

Naturally, werewolves are stronger and more durable than humans and Meif'was while also having a higher pain tolerance. To keep order between races, werewolves are not allowed to use physical violence on humans or Meif'was. Such an act is considered illegal and could result in being taken in for questioning. Some areas even go as far as to ban all werewolves if one were to cause havoc, although this does lead to conflict.

Werewolves usually live in close communities called tribes, that usually consist of one large family tree, and most have a form of hierarchy within their tribe, with a male and female leading the tribe as the King and Queen (also known as the Alpha Male and Alpha Female). Werewolves also appear to be quite socially conservative with regards to their political and religious views, though some tribes have started to introduce new ideologies to their way of life, though some still retain their traditions, including arranged marriage between the children of two tribal leaders.

Werewolves are known to actuate in what is known as Packs. These packs can be comprised of any number of werewolves and usually have an order of a sort. Similarly to tribes in Minecraft Diaries, every pack has two leaders known as Alphas (one female and one male) who are tasked with the role of helping the other werewolves in the pack. In accordance with this tradition, however, the role of Alpha comes with the responsibility of electing an Omega, who is usually esteemed to be the most-hated werewolf of the pack. This doesn't necessarily mean the other members are required to hate the person, but they do most of the time since this is in line with their Werewolf nature

The history of Werewolves is shown to have traced back to one human, known as 'The Ultima Werewolf'. It is said that this human once lived happily alongside his wife, who he loved deeply. All of a sudden, his wife fell deathly ill, eventually falling victim to what had come over her. A demon agreed to bring her back to life, under the circumstances that the widowed husband brought a living oblation, to which he decided to sacrifice the life of a wolf. This exploit greatly aggravated the Wolf Deity and caused it to transform the man into a werewolf. Upon arrival to his village, the man realized that his curse was not being a werewolf, but it was that he now possessed the uncontrollable ability to transform other humans into werewolves. It was not long before all the residents of his village were turned into werewolves themselves. The man became Alpha of this pack and they became the first werewolf group to roam the earth. To the current day, the man's bloodline is known as the 'Ultima'. In Mystreet's current era, the Ultima Werewolf bloodline stretches out to Aaron Lycan. It is hinted that Derek Lycan, Aaron's father, comprehends the burden of being an Ultima from experience so it can be said that he is also one.

Currently, the werewolves have been accepted by mankind like they did to Meif'was. Some beings still think that werewolves are horrible monsters, but we cannot control what they think. Although at some areas werewolves aren't allowed to roam, the werewolves are now living normal lives and none have been treated terribly. They now roam the Earth like normal beings, except for the Ultima who is being hunted by the Guardian Forces at starlight

The Ultima started from the Husband's bloodline. The Ultima has the power to turn any humans into werewolves from a bite or untamed eyes and to turn any werewolves into humans. He can only do that when his eyes are untamed or release its power. An Ultima has midnight black ear and tail. The tip of his ears would be blood red (if a genetic flaw happens). When his eyes are untamed, they would be a wild orange.

There has been two times in Werewolf History when an Ultima accidentally turned a human into a werewolf. It was done by Derek (The former Ultima) and Aaron (The current Ultima). Currently, there are two Ultimas roaming the Earth. They both have a Father and Son relationship. The pair's name and surname would not be revealed, for privacy matters.

The transformation into a werewolf is incredibly painful. The recipient has a chance of dying during the process. If a human were to lock eyes with an Ultima's untamed eyes, the recipient has a higher chance of dying. Most do not survive the transformation by the eyes. A bite is much safer and less painful, and most survive the transformation this way. It is still quite painful, reported to feel as if the recipients bones were breaking and their whole body was on fire and freezing at the same time. This is probably due to rapid muscle growth, bones and cartilage forming out of nowhere, and human cells and organs being broken down and replaced by those of werewolves. Cravings and mood swings might also happen. The whole process last a couple of days, a week in some cases, but the pain recedes as days pass. The ears and tail come in after one or two days, and they start out looking like the ears and tail of a werewolf pup. The recipient will not be able to move or hide them during these early stages. The ears and tail will mature later on, and will match the recipients' age.

In their human forms, most werewolves would not be deemed any different physically than a regular human, however, it appears that they have a 3rd form as in a furry tail and ears. Not much is known of this form, but we see a lot of it though in S2 we think that it's a natural form

In their wolf forms, most werewolves seem to take the form of a therianthropic hybrid creature rather than an actual wolf, as they are still able to speak English, and stand of their hind legs rather than on all fours like a real wolf. However, younger werewolves, such as Leona, Lello and Rollo, walk on all fours in their wolves forms, suggesting that werewolves gradually move onto their hind legs as they get older. 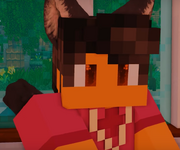 Dottie, Daniel and Rylan (From left to right)

The husband and the wife...

Ein~kun from D and D
Add a photo to this gallery
Retrieved from "https://aphmau.fandom.com/wiki/Werewolves?oldid=157423"
Community content is available under CC-BY-SA unless otherwise noted.