Zanemau is a ship between High Priest of O'Khasis, Zane and former Lord of Phoenix Drop and leader of the Phoenix Alliance, Aphmau from the Minecraft Diaries.

The ship has been generally small during the main series Zane is in, seeing as the antagonistic role he plays in the series has more weight compared to what he does in Side Stories or MyStreet (eg. Murdering entire villages, tricking villages into war, etc.). Zane is the villain in Minecraft Diaries, Jess' main series on her channel, which is why so many people don't want Zanemau to happen.

The ship became much bigger in an episode of MyStreet called "How the Zane Stole Christmas," when Zane decides to steal Christmas with his accomplice, Pinkie Cake, who is supposed to be based after Pinkie Pie from My Little Pony. Aphmau eventually woke up in the night to get some water, and finds "Santa Claus" to be stealing her tree.

"Santa" says that he needs to take it in because there is a light that went out, Aphmau replies by saying she has a light in the garage, but then Zane yells "Go back to bed!". Which ends up on the morning of Christmas Day when Aphmau Kisses Zane on the cheek under the mistletoe. This is one of the main supports for Zanemau in MyStreet.

Ever since Aphmau befriended Zane, he has shown his softer side more often. He even went as far as showing his interest to her on My Little Pony and the two often hangs out constantly. Upon being friends, Zane has been interested in making new friends and form new connections through the support of Aphmau. Although Zane turned over a new leaf, he often makes rude and sarcastic remarks which Aphmau scolds him for. During the play, Zane cared for Aphmau's well-being because of her nervousness as well as wishing her luck for the play. Since they have gotten close, Zane is overprotective of Aphmau at times and looks after her. The two are polar opposites of each others, which is why they might not see eye-to-eye all the time.

In the Valentine's Day arc in MyStreet, Zane showed his caring attitude once more when he was protective over Aphmau. Along with Aphmau's lead, the two are shown to have a healthy relationship and have a back-and-forth response during Travis' arrival.

In "Aphmau in Love", Zane appears to harbor some feelings for Aphmau, however, this might not be true as he prefers their friendship rather than a relationship. This is similar to Aphmau, as she feels the same way to Zane. In the following episode, "Her Best Friends", Zane is shown to have been into his character much, which is why he appeared to have liked Aphmau romantically.

in “Laurance’s Baby Brother”, Zane has a flashback of being a baby. In his flashback, he remembers being held by Aphmau and he blushes. Garroth questions this, but Zane denies everything.

Zane seems to be supportive of Aaron and Aphmau. He mentions before that emotions confuse him, or at least signals it. Garroth also mentions in the other series that Zane had personality issues since he was little, which explains a lot of things about his lack of emotions.

Sadly Zanemau can no longer happen in the series, since in Minecraft Diaries Zane is an antagonist, and in MyStreet, Aphmau is taken by Aaron, and Zane is in a relationship with Kawaii~Chan. 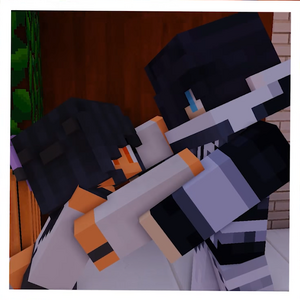 Retrieved from "https://aphmau.fandom.com/wiki/Zanemau?oldid=155438"
Community content is available under CC-BY-SA unless otherwise noted.