Zane~Chan is a relatively new ship that picked up pace in MyStreet season 2. Though it did exist before hand, it was extremely small and had no evidence.

This is a ship that recently gained a lot of popularity after season 2 of MyStreet. Zane and Kawaii~Chan have an 'incident' and Kawaii~Chan may have a 'little crush' on Zane. Since then it was a fan-favourite and even to this day still is one of the most solid ships.

In the minigame 'Never Have I Ever: Snuggle Buddies', Kawaii~Chan's crush on Zane was verbally mentioned for the first time, even though it was only first admitted canonically in Season 5.

Zane lies to Aphmau, saying he has a crush on a meif'wa girl, and Aphmau quickly asks if it's Kawaii-Chan. Not much is mentioned between the two after.

In Falcon Claw University, the two get a job at the cafe. The whole episode is called "Rude...But Kinda Cute," clearly hinting at their relationship. Zane also accidentally stands up for her with a rude customer.

Not much happens in Season One, as the two rarely interact with each other. In the very last episode, the picture that is shown on the last credit screen shows Zane with his hand over Kawaii-Chan's eyes.

While swimming in the lazy river, a child grabs Kawaii-Chan's tail and she ends up falling into Zane's arms. Both are seen blushing after the incident. In the episode labelled "Zane's Pants," Kawaii-Chan is the one who encourages him (and eventually pushes him) down the slide. It is also seen in Season 2 that Kawaii-Chan attempts to force-feed Zane pudding while they are sat at the same table, eating.

With the new Kawaii~Chan ships, Zane~Chan has become less common, but has still shown when Zane blushes at her and is seen as being a little jealous when she goes on a date, possibly meaning he has a crush on her.

In Aphmau's year, Zane tells Kawaii~Chan about what happened to Aaron and he visibly trusts her. Kim's ghost can also sense their chemistry and gets jealous. You can see them become closer within each episode. In the first episode of Starlight, Zane sneaks Kawaii-Chan into the island in a massive pink suitcase and brings her food because Kawaii~Chan wanted to see Aarmau happen. Zane says that she asked in a rude way, but he was going to bring her anyway. Kawaii~Chan blushes A LOT.

Kawaii~Chan also trusts Zane well enough to confide in him and tell him about her backstory. Later at the Tropical Jungle Cafe, Kawaii~Chan then revealed her true name, Nana, showing more signs of trust as they spy on Aphmau, Aaron, Katelyn and Travis.

After realizing that Ghost wants Zane and wants to be shipped with him when Kawaii~Chan and Zane went to the haunted house along with Garroth and Kim/Ghost, Kawaii~Chan took Zane to another room and confessed her feelings and the two kiss, thus the ship has sailed.

In episode 16 of Starlight, after the two kiss, they both become embarrassed and apologize to one another frantically until they are scared out of the haunted house. Both call Aphmau and ask her for advice on the situation, with Kawaii~Chan fearing she moved too quickly in the relationship and Zane worrying if he deserves a girl like her. Aphmau tells them both to work it out on their own and see if they are compatible to be in a relationship. The episode ends with Zane asking Kawaii~Chan on a date, which she says yes too. In the next episode of Starlight, they are seen sitting together debating where to go on their date. Garroth then interrupts the conversation and suggests going to the adventure park at night. Near the end of the episode they are seen on the date, both blushing as they entered the gates.

Episode 18 of Starlight shows advancements of the Zane~Chan relationship. The pair go on a date where the both find themselves extremely nervous. After some help with his mommy, Zane builds up the courage to talk to Kawaii~Chan and the date is smooth sailing from there. By the end of the night, Kawaii~Chan trusts Zane enough to allow him to call her by her real name, "Nana."

Soon after their first date, Zane and Kawaii~Chan discover that Zane's mother is in on the ship. His mother, being the caring, loving woman that she is, immediately takes a liking to Kawaii~Chan and gives her a big hug. Zane of course is embarrassed and deals with the situation the same way he deals with all of his problems, by running away.

Then in When Angles Fall the ship stops for a bit when they got separated. Then in when Kawaii~Chan saves Zane, there's a shot of the ship. In episode 15 when they were trying to find out who will become a relic, Kawaii~Chan volunteers to become one but Zane says it is too dangerous for that to happen so she does not, clearly displaying Zane's protectiveness over her. 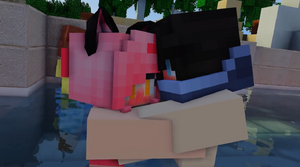 Retrieved from "https://aphmau.fandom.com/wiki/Zane%7EChan?oldid=157517"
Community content is available under CC-BY-SA unless otherwise noted.